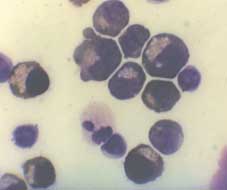 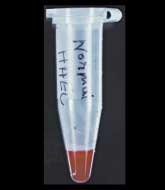 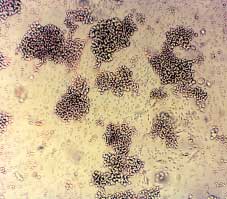 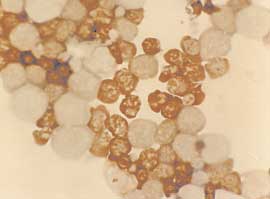 CULTURE MODELS FOR STUDYING HBF STIMULATION Figure 2.—Erythroid cells in culture. A) Lar ge aggregates of erythroid precursors on day 6 of phase II. Unstained cells were photographed in situ using an inverted microscope. B) Benzidine staining of cells from day 8 phase II cultures. Cells were smeared on a glass slide using a cytocentrifuge, and stained with benzidine. Mature erythroid Hb-containing cells which are benzidine positive (B+) and early erythroid pre-cursors which are benzidine negative (B-) are seen. C) Benzidine/Giemsa staining of cells from day 10 cultures. Cells were smeared as in Bfollowed by staining with Giemsa. Both B+ erythroid cells and B- myeloid and lymphoid cells are seen. D) Cells harvested on day 12 of theculture.
ulation. Following the beginning of maturation, eryth- blood from patients with thal or SCA, because of the roid cells can be purified to >99% using immuno- high frequency of erythroid progenitors,23 20 ml of magnetic beads directed against erythroid specific whole blood can be used for 20 ml cultures that even- membrane antigen such as glycophorin A.32 For nor- mal erythroid cultures, the buffy coat fraction (that is Peripheral blood cells are employed in this proce- usually discarded by the Blood Bank) of a whole dure for the following reasons: a) the availability of PB blood unit may be used for setting up 100 ml cul- from normal individuals and patients; b) the homoge- tures. In such cases, a total of up to 3×108 cells can be neity of the peripheral blood erythroid progenitors, harvested on day 12 of the culture (Figure 2D). With namely early BFUe, as opposed to the BM which con- 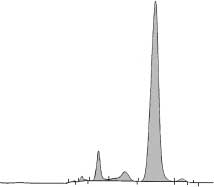 CULTURE MODELS FOR STUDYING HBF STIMULATION tains progenitors at various developmental stages.33 Good results can be obtained with cells derived fromother sources, including CD34+ cells purified by immu- no-magnetic bead technologies, but, in these cases some modifications of the procedure are required.
This system recapitulates many aspects of in vivo erythropoiesis including globin RNA metabolism,34-36 cell cycle kinetics,37 cell surface antigens,38 iron andferritin metabolism 39-42 and transcription factors.37, 43 We have used this system to study the effects of hundreds of compounds, including butyroids,44, 45hemin 46 and EPO 47 and histone deacetylase inhibi- tors.48 For studying their potential to enhance HbFproduction, compounds can be added to phase I, phase II or both. Non-toxic drugs such as cytokines and hemin may be added to the cultures at any time.
With cytotoxic drugs, such as HU and 5-azacytidine, because of their cyto-toxic/-static effects, they are usually added on day 4-8 of phase II.
Since the erythroid cells in phase II are grown in suspension, samples of cells can be withdrawn at any time without disturbing the cultures and assayed for sis, cell cycle or expression of surface antigens.
Hemoglobinization can be easily followed by staining Figure 3.—HPLC chromatogram of hemoglobins produced by cul- the cells with benzidine solutions.25 The benzidine tured erythroid cells. Cells were harvested from day 12 cultures,washed and lysed. The hemoglobins in the lysate were separated on staining is specific for heme-containing compounds.
cation-exchange HPLC. The peaks are labeled with the retention timesand the corresponding hemoglobin type.
Smear of cells on a glass slide can be stained with a
combination of 3’,-3’,-dimethoxybenzidine, whichG
stains the Hb-containing cells brown, and Giemsa,which permits detailed examination of the cell mor- The distribution of the erythroid cell population phology (Figures 2B, C). The “blue” method with with respect to intracellular content of HbF can be dihycrochloric benzidine stains the cells in their orig- analyzed by flow cytometry using monoclonal antibod- inal medium. It requires one drop of culture and after ies directed specifically against HbF 52, 53 (Figure 4).
1 minute the cells are scored in a hemocytometer and Dual/triple staining with the corresponding antibod- the number and percentage of positive cells deter- ies can be used for simultaneous analysis of both mined. Using this procedure, positive cells can be HbA (or HbS) and HbF, or Hb and another marker of routinely found after 4-5 days in phase II.
interest such as glycophorin A or CD36 surface anti- The Hb content of the developing erythroid cells can be measured by a variety of techniques, such as The results with HU indicated that cultured cells the alkaline denaturation and benzidine staining 49 recapitulated many aspects of hemopoiesis in HU- and high-performance liquid chromatography (HPLC), treated patients: a reduction in cell number, an increase cation-exchange HPLC for hemoglobins (Figure 3) and in cell size (mean corpuscolar volume, MCV), an reverse-phase HPLC for globin chains.50, 51 Using the increase in total Hb per cell (mean corpuscolar hemo- HPLC techniques, Hb is measurable in culture as ear- globin, MCH) and an increase in the proportion of ly as 5 days in phase II. On day 12, one ml culture is HbF.54 Using cultures derived from SCA patients, we sufficient for multiple measurements. The mean cellu- have shown that following treatment with HU and lar Hb or HbF concentration of erythroid cells are cal- other HbF-stimulating drugs, sickle Hb polymerization culated from the values of the HPLC determinations and cell sickling in low oxygen atmosphere was inhib- divided by the number of benzidine-positive cells.
ited.55 Moreover, preliminary data suggest a correlation

TITLE XI: BUSINESS REGULATIONS 110. RETAIL PERMITS CHAPTER 110: RETAIL PERMITS 110.01 Limitation on sale of pharmaceuticals SELL. Furnish, give away, exchange, transfer, deliver, surrender, distribute or supply, whether or not for monetary gain or other WHOLESALER. One whose business is § 110.01 LIMITATION ON SALE OF the selling of goods in gross to retail stores fo