Paracetamol has analgesic and antipyretic properties. It acts predominantly by inhibiting prostaglandin
Pharmacokinetics:
Following oral administration, paracetamol is well absorbed, with peak plasma concentrations obtained after 0.5 to 1 hour. The plasma half-life is about 2 hours. Paracetamol is metabolised in the liver primarily by conjugation with glucuronic acid (about 60 %), sulphuric acid (about 35 %) and cysteine (about 3 %). Paracetamol is renally excreted primarily as conjugated INDICATIONS:
PANADO MELTABS are indicated for the symptomatic treatment of mild to moderate pain and fever.
CONTRA-INDICATIONS:
Hypersensitivity to any of the ingredients of PANADO MELTABS.
WARNINGS:
Dosages of PANADO MELTABS in excess of those recommended may cause severe liver damage.
Consult a medical practitioner if pain or fever persists or gets worse at the recommended dosage, if new symptoms occur or if redness and swelling is present, as these could be signs of a more serious condition. Do not use this product continuously without consulting a medical practitioner: For pain – for more than seven days in adults (5 days for children);
For fever – for more than 3 days.
In the event of overdosage or suspected overdosage and notwithstanding the fact that the person
may be asymptomatic, the nearest doctor, hospital or poison centre must be contacted immediately.
Store in a safe place out of reach of children. Patients suffering from hepatitis or alcoholism, or recovering from any form of liver disease, should not take excessive quantities of PANADO MELTABS.
Phenylketonurics: PANADO MELTABS contain phenylalanine (aspartame).
INTERACTIONS:
Hepatotoxic medicines – Increased risk of hepatotoxicity. Enzyme inducing medicines – Increased risk of hepatotoxicity. Possible decrease in therapeutic effects of PANADO MELTABS.
Metoclopramide – Absorption of PANADO MELTABS may be accelerated.
Cholestyramine – Absorption of PANADO MELTABS is reduced if given within one hour of cholestyramine.
Prolonged concurrent use of PANADO MELTABS with salicylates increases the risk of adverse renal
PREGNANCY AND LACTATION:
Safety and efficacy in pregnancy and lactation have not been established. DOSAGE AND DIRECTIONS FOR USE:
DO NOT EXCEED THE RECOMMENDED DOSE.

PANADO MELTABS are to be dissolved in the mouth, and not chewed. The tablets may also be dispersed
Adults: 1 – 2 tablets (500 – 1 000 mg paracetamol) every 4 – 6 hours while symptoms persist. Do not
exceed 8 tablets (4 g paracetamol) in 24 hours. SIDE-EFFECTS AND SPECIAL PRECAUTIONS:
Blood and lymphatic system disorders: agranulocytosis, thromobocytopenia, leucopenia, pancytopenia,
Renal and urinary disorders: renal colic, renal failure and sterile pyuria.
Hepatobiliary disorders: hepatitis.
Gastrointestinal disorders: pancreatitis.
Skin and subcutaneous tissue disorders: dermatitis, skin rashes and other allergic reactions. The rash is
usually erythematous or urticarial but sometimes more serious and accompanied by fever and mucosal Special Precautions:
(see WARNINGS)
KNOWN SYMPTOMS OF OVERDOSAGE AND PARTICULARS OF ITS TREATMENT
(see SIDE-EFFECTS AND SPECIAL PRECAUTIONS)
Prompt treatment is essential. In the event of an overdosage, consult a doctor immediately, or take the
person to a hospital directly. A delay in starting treatment may mean that antidote is given too late to be effective. Evidence of liver damage is often delayed until after the time for effective treatment has lapsed. Susceptibility to paracetamol toxicity is increased in patients who have taken repeated high doses (greater than 5 – 10 g/day) of paracetamol for several days, in chronic alcoholism, chronic liver disease, AIDS, malnutrition, and with the use of drugs that induce liver microsomal oxidation such as barbiturates, isoniazid, rifampicin, phenytoin and carbamazepine. Symptoms of paracetamol overdosage in the first 24 hours include pallor, nausea, vomiting, anorexia and possibly abdominal pain. Mild symptoms during the first two days of acute poisoning do not reflect the potential seriousness of the overdosage. Liver damage may become apparent 12 to 48 hours, or later, after ingestion, initially by elevation of the serum transaminase and lactic dehydrogenase activity, increased serum bilirubin concentration and prolongation of the prothrombin time. Liver damage may lead to Acute renal failure with acute tubular necrosis may develop even in the absence of severe liver damage. Abnormalities of glucose metabolism and metabolic acidosis may occur. Cardiac arrhythmias have been Treatment of paracetamol overdosage:
Although evidence is limited it is recommended that any adult person who has ingested 5 – 10 grams or more of paracetamol (or a child who has had more than 140 mg/kg) within the preceding four hours, should have the stomach emptied by lavage (emesis may be adequate for children) and a single dose of 50 g activated charcoal given via the lavage tube. Ingestion of amounts of paracetamol smaller than this may require treatment in patients susceptible to paracetamol poisoning (see above). In patients who are stuperose or comatose endotracheal intubation should precede gastric lavage in order to avoid aspiration. N-acetylcysteine should be administered to all cases of suspected overdose as soon as possible preferably
within eight hours of overdosage, although treatment up to 36 hours after ingestion may still be of benefit, especially if more than 150 mg/kg of paracetamol was taken. An initial dose of 150 mg/kg N-acetylcysteine in 200 ml dextrose injection given intravenously over 15 minutes, followed by an infusion of 50 mg/kg in 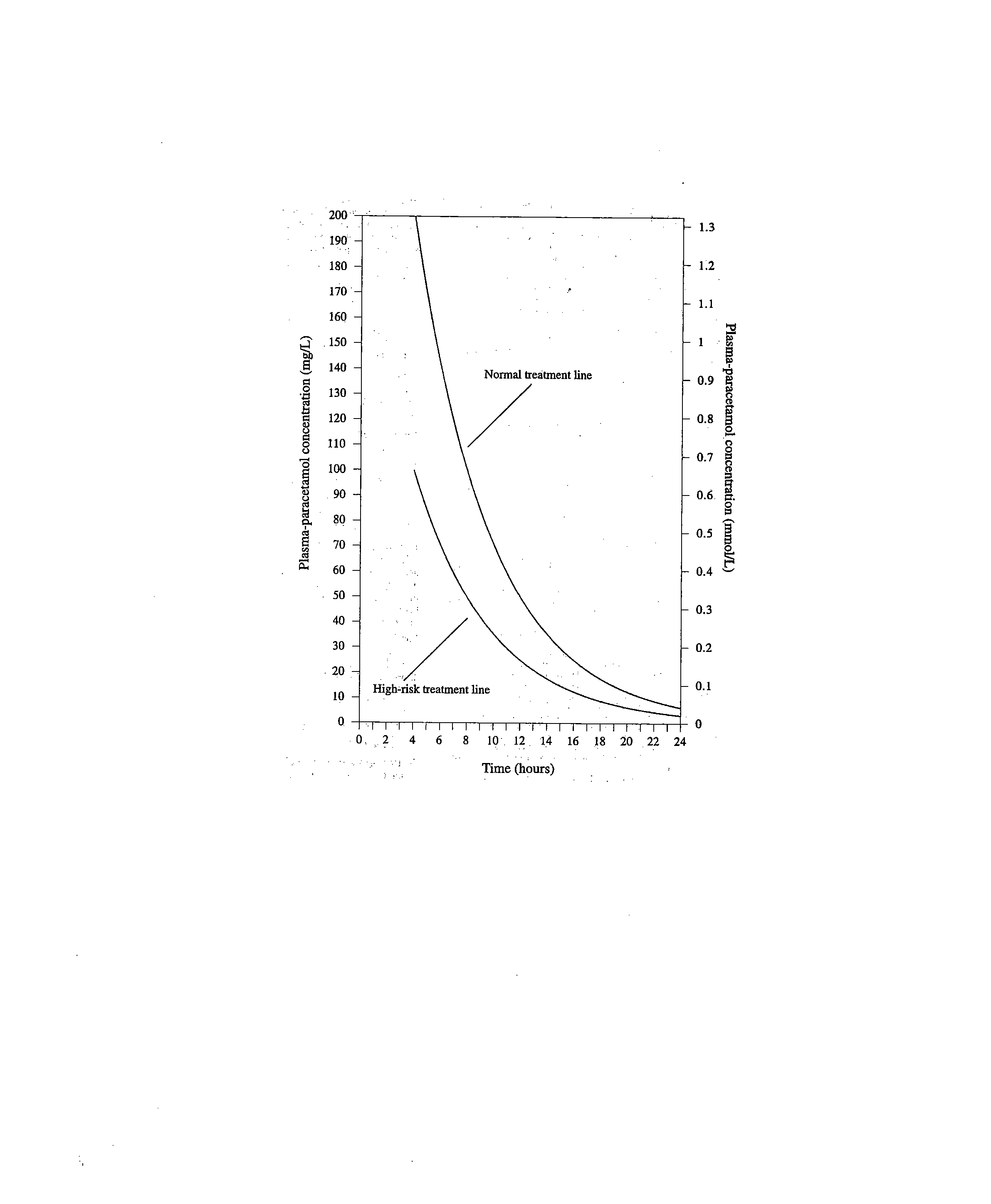 500 ml dextrose injection over the next four hours, and then 100 mg/kg in 1 000 ml dextrose injection over the next sixteen hours. The volume of intravenous fluid should be modified for children.
Although the oral formulation is not the treatment of choice, 140 mg/kg dissolved in water may be administered initially, followed by 70 mg/kg every four hours for seventeen doses. A plasma paracetamol level should be determined four hours after ingestion in all cases of suspected overdosage. Levels done before four hours, unless high, may be misleading. Patients at risk of liver damage, and hence requiring continued treatment with N-acetylcysteine, can be identified according to their plasma paracetamol level. The plasma paracetamol level can be plotted against time since ingestion. A linear plot of plasma-paracetamol concentration against hours after ingestion Those whose plasma paracetamol levels are above the ‘normal treatment line’ should continue N- acetylcysteine treatment with 100 mg/kg IV over sixteen hours repeatedly until recovery. Patients with increased susceptibility to liver damage as identified above, should continue treatment if concentrations are above the ‘high risk treatment line’. Prothrombin index correlates best with survival. Monitor all patients with significant ingestions for at least ninety-six hours. IDENTIFICATION:
White, round, bi-convex tablet with central concave depression, 17 mm in diameter with a characteristic PRESENTATION:
Polyamide/Alu/PVC or Alu/Polyethylene blister packs of 2, 4, 6, 12, 16, 18, 24 or 48 tablets. STORAGE INSTRUCTIONS:
Store below 25 °C. Protect from light and air. The blister packs must be stored in the carton and only removed when required for use. After use the blister packs must be placed back into the carton. REGISTRATION NUMBER:
NAME AND BUSINESS ADDRESS OF THE HOLDER OF THE CERTIFICATE OF REGISTRATION
DATE OF PUBLICATION OF PACKAGE INSERT

[email protected] Philip S. Chua, M.D. Viagra Revisited How extensively has Viagra been prescribed todate? Since we first reported on Viagra (Sildenafil Citrate) in the June 18, 1998 issue of the Cebu Daily News, two months after it was introduced in the United States, more than 25 million prescriptions for Viagra have been written so far by more than 290,000 physicians in US alone.