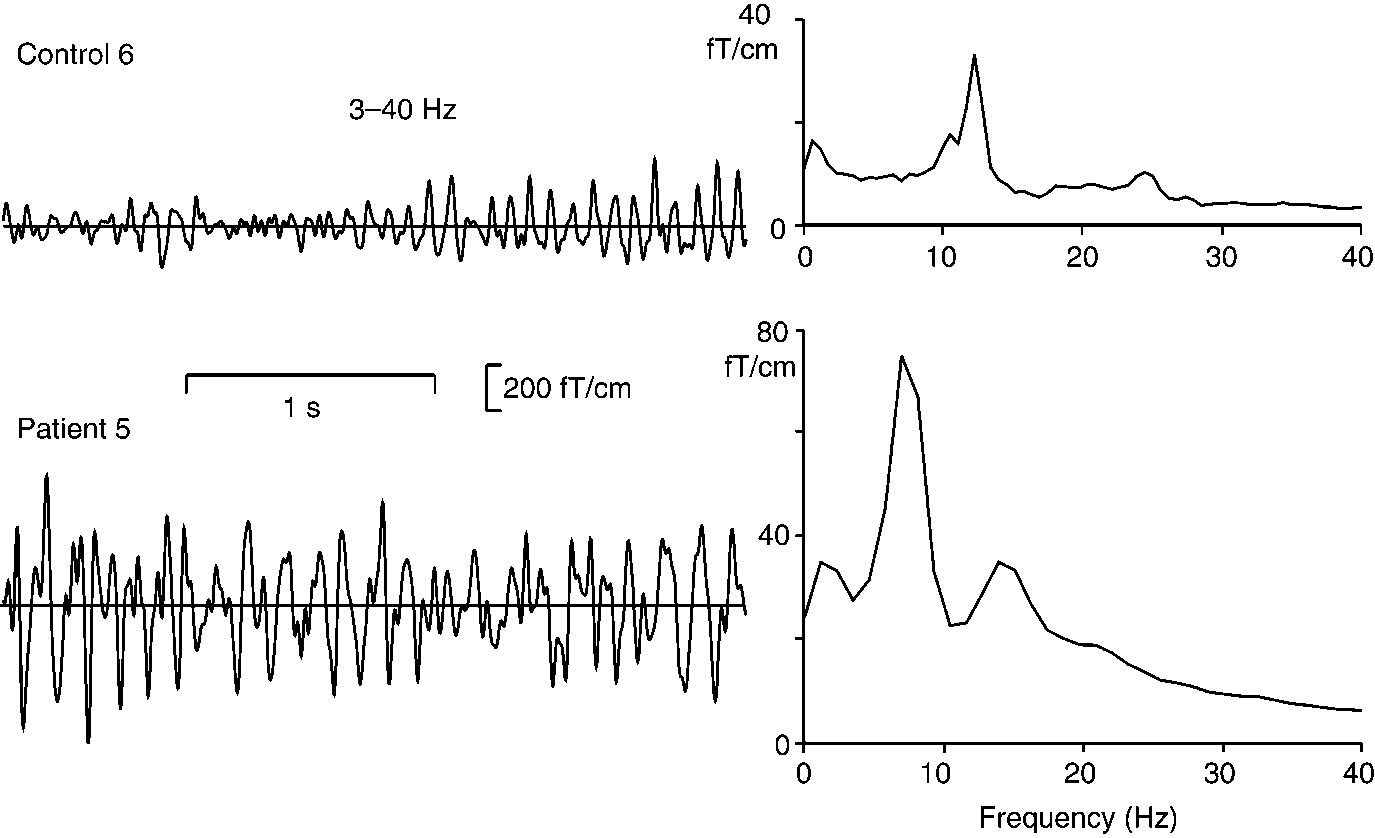 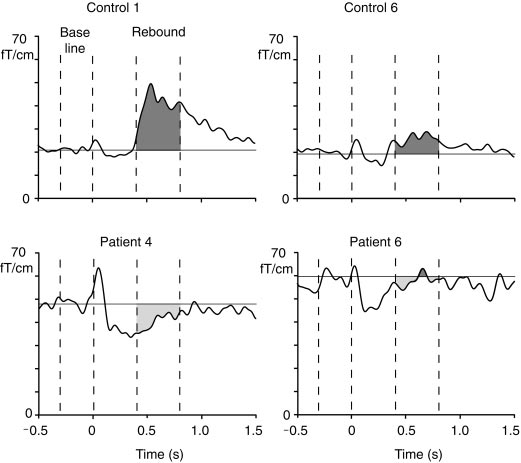 MOTOR CORTEX RHYTHM IN MYOCLONUS EPILEPSY Left: 3-s periods of spontaneous activity from one MEG channel over the left sensorimotor cortex in Control 6 and Patient 5 during rest. Signals were filtered through 3– 40 Hz. Right: MEG spectra of 2-min epochs from the corresponding channels (not filtered).
two times stronger and peaks at lower frequencies, 7 sponse. In the control subjects, the ϳ20-Hz rhythm is first suppressed after the evoked response and then The mean (ϮSEM) peak frequency of the ϳ10-Hz strongly enhanced; this “rebound” reaches its peak am- component of the mu rhythm was 2.5–2.7 Hz lower in plitude at 500 –700 ms. In the two patients, the behav- patients than in controls (8.1 Ϯ 0.3 Hz vs 10.6 Ϯ 0.5 Hz ior of the 20-Hz rhythm differs in many respects: (i) the over the left hemisphere, P Ͻ 0.005; 8.1 Ϯ 0.3 Hz vs baseline level is much stronger than in the controls, (ii) 10.8 Ϯ 0.4 Hz over the right hemisphere, P Ͻ 0.001).
the suppression is stronger and prolonged, and (iii) The ϳ10-Hz spectral peak was stronger in patients there is no rebound. In controls, the rebounds peaked than in controls (38.9 Ϯ 8.7 fT/cm vs 20.4 Ϯ 5.7 fT/cm over the left and 46.8 Ϯ 5.2 fT/cm vs 21.9 Ϯ 4.6 fT/cmover the right hemisphere; the difference was statisti-cally significant in the right hemisphere, P Ͻ 0.005).
The ϳ20 Hz rhythm peaked at 4.6 –5.3 Hz lower frequencies in patients than in controls (15.9 Ϯ 0.8 Hzvs 20.5 Ϯ 1.2 Hz over the left and 16.3 Ϯ 1.0 Hz vs21.6 Ϯ 1.5 Hz over the right hemisphere; P Ͻ 0.01 andP Ͻ 0.05, respectively). The strength of the ϳ20 Hzspectral peak was ϳ2-fold in patients compared withcontrols (21.3 Ϯ 2.9 fT/cm vs 8.7 Ϯ 1.0 fT/cm over theleft hemisphere and 25.6 Ϯ 3.3 fT/cm vs 10.6 Ϯ 1.0fT/cm over the right hemisphere; P Ͻ 0.001 for bothdifferences).
The mean (ϮSEM) source locations of the rhythmic signals of Patient 5, superimposed on her MR images,agreed with the location of the hand region of thecentral sulcus. The mean location was 4 mm moreanterior (P Ͻ 0.05) for the 10 –20 Hz than for the 4 –12Hz oscillations, in agreement with previously sug-gested generation of the higher mu rhythm componentin the precentral motor cortex.
Figure 2 shows reactivity of the ϳ20-Hz level over the right sensorimotor cortex in Controls 1 and 6 and Stimulus-related changes in the ϳ20-Hz mu rhythm in Patients 4 and 6; the left median nerve was stimu- level of Controls 1 and 6 and Patients 4 and 6. Light gray shadowed lated at time 0. In all traces, the transient increase areas show the suppression and dark gray shadowed areas the immediately after the stimulus reflects the evoked re- rebounds 400 – 800 ms after stimulus. 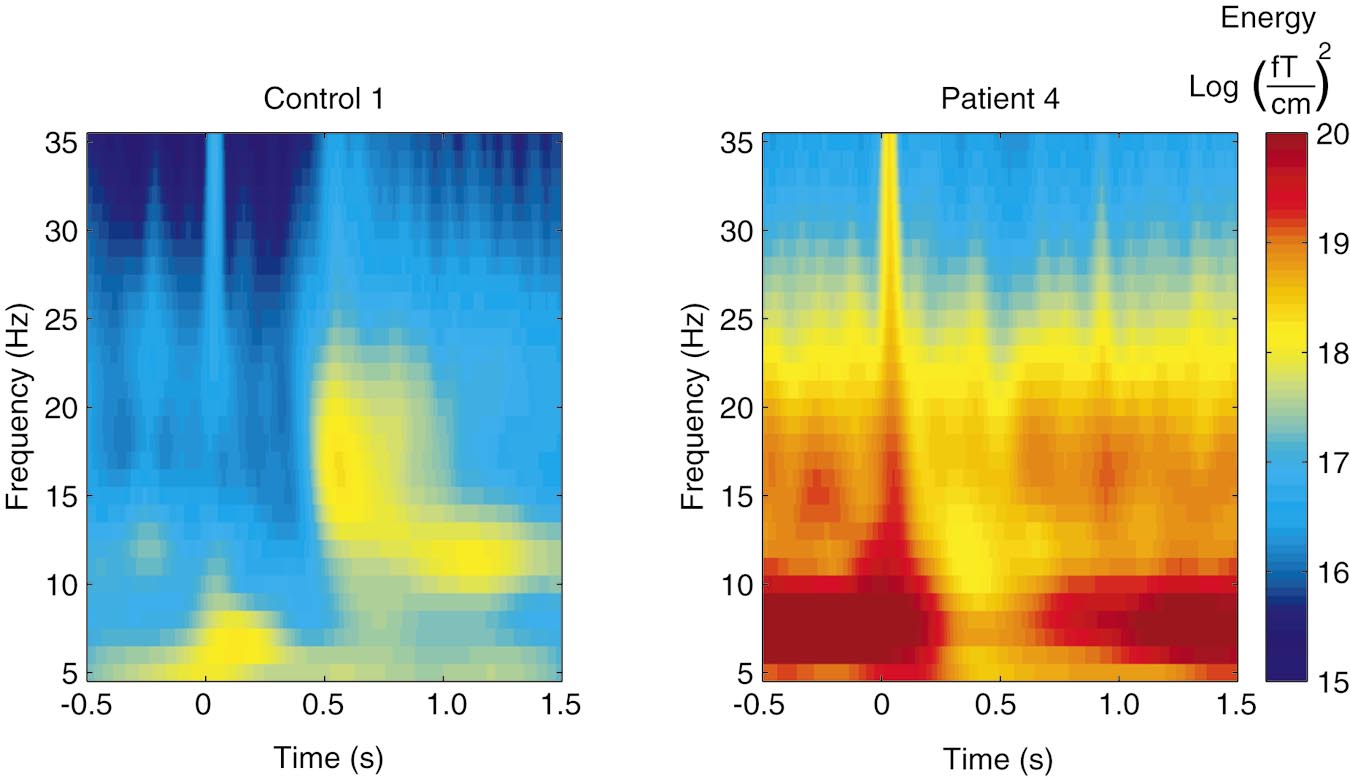 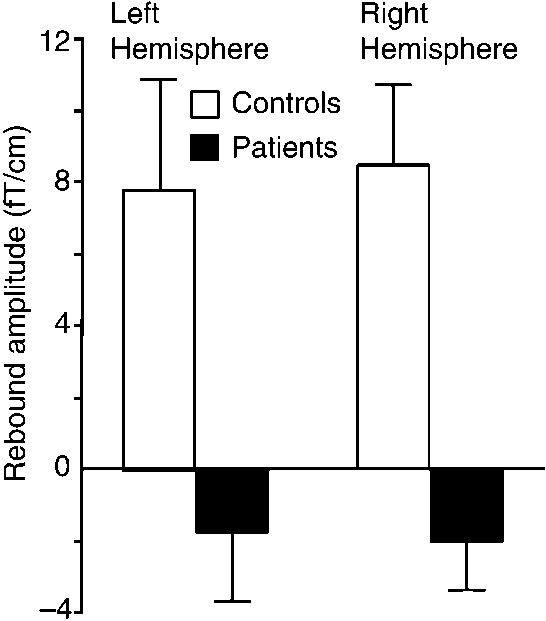 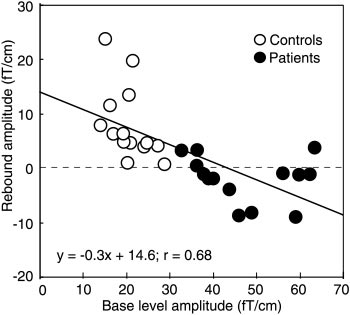 IN THE COURT OF APPEALS OF THE STATE OF KANSAS When the sufficiency of the evidence is challenged in a criminal case, the standard of review is whether, after review of all the evidence, taken in the light most favorable to the State, the appellate court is convinced that a rational factfinder could have found the defendant guilty beyond a reasonable doubt. In making this determination, an app

JASON WINN WORK EXPERIENCE Software Engineer Intern, Zynga, Toronto, May 2013 - August 2013 • Acted as the sole developer in creating C# framework bindings to connect Unity through C to C++ (script-generated bindings), and finally to native • Worked with Google’s IABv3, Amazon IAP, and a slew of other payment providers, in order to unify IAP into a convenient API for game te