Elmer Press
Which Is the Best Treatment for Diabetes Complicated With Severe Obesity, Intensive Insulin Therapy or Basal Sumie Moriyamaa, c, Hidekatsu Yanaia, b, c, d mg/day, and insulin glargine 24 units/day) reduced body Letter to the Editor:
weight (from 92.1 to 86.0 kg) and HbA (from 10.3 to 9.2%) after 9 months (Fig. 1). However, we decided to change the Type 2 diabetes is commonly complicated with obesity. Al- treatment from BOT to the GLP-1 analog (liraglutide) use, though achieving a healthy weight and preventing weight because her HbA level was still high. At this time, her body gain are integral components of optimal diabetes manage- weight was 86 kg and height 149 cm (BMI 38.7 kg/m2). ment, an improvement of glycemic control with the treat- As a result of the measurement using abdominal computed ment usually induces weight gain [1]. Until now, we do not tomography, abdominal circumference was 121.0 cm, while exactly understand which treatment is the best for diabetes subcutaneous fat area and visceral fat area were 374.5 and complicated with severe obesity. We will show the changes 362.6 cm2 (Fig. 2), respectively, showing severe obesity. To in body weight and glycemic control in a type 2 diabetic pa- understand her insulin-dependence, a glucagon loading test tient complicated with severe obesity, by the intensive insu- and the measurement of daily urinary C-peptide (CPR) level lin therapy (IIT), basal supported oral therapy (BOT), and were performed. Serum fasting CPR level and serum CPR level at 6 minutes after a glucagon loading were 1.28 and A 60-year-old woman was referred and admitted to our 3.31 ng/ml, respectively, and urinary CPR level was 40.6 μg/ hospital due to poor blood glucose control in spite of the day, which indicated that she has a suffi cient insulin secretion treatment by IIT. At the age of 47 she was diagnosed as type capacity. Therefore, we switched from BOT to the GLP-1 2 diabetes. For the last one year, she was treated with four analog use. Switching to the GLP-1 analog (liraglutide 0.9 daily insulin injections: three injections of insulin aspart mg/day) as monotherapy signifi cantly reduced body weight before breakfast (14 units), lunch (14 units), and dinner (14 (from 86.0 to 77.0 kg) after fi ve months, and the addition of units) and one of insulin detemir (18 units) at bedtime. Her daily 1 mg of glimepiride to the GLP-1 analog signifi cantly body weight was 92.1 kg and height 149 cm (BMI 41.5 kg/ reduced HbA (from 9.0 to 7.9%) (Fig. 1). m2). Fasting plasma glucose (284 mg/dl) and HbA (NGSP Therapeutic strategies to prevent or minimize weight value, 10.3%) levels were signifi cantly elevated. Switching gain, especially in obese diabetic patients, are very impor- from IIT to BOT (glimepiride 1 mg/day, metformin 1,000 tant to help diabetic patients manage their glycemic control and keep or improve their quality of life. However, an in-tensive therapy is likely to induce weight gain. Weight gain was identifi ed as a sequela of IIT in the Diabetes Control and Complications Trial (DCCT), which is a multicenter controlled clinical trial designated to determine the effects of two different diabetes treatment regimens on complications Manuscript accepted for publication October 12, 2011 of type 1 diabetic patients [2]. Higher baseline HbA levels and greater decrements in HbA during intensive therapy Department of Internal Medicine, National Center for Global Health were both associated with greater weight gain in the DCCT. and Medicine, Kohnodai Hospital, Ichikawa, Japan In our patients, switching from IIT to BOT decreased daily Clinical Research Center, National Center for Global Health and Medicine, Kohnodai Hospital, Ichikawa, Japan insulin use from 60 units to 24 units, which may be associ- cSumie Moriyama and Hidekatsu Yanai contributed equally to this ated with weight loss. BOT has been reported to minimize weight gain compared with premixed insulin and prandial insulin regimens [1], supporting our result. The effects of liraglutide have been studied in the Lira- glutide Effect and Action in Diabetes (LEAD). In the LEAD-5 study, liraglutide added to metformin and sulfonylurea Articles The authors | Journal compilation J Endocrinol Metab and Elmer Press™ | www.jofem.org 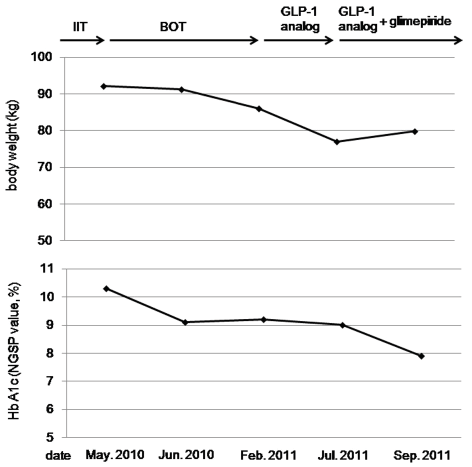 Beeld; 26 May 2009 (English translation) ‘Box’ just might be nicotine’s killer, Say farewell to cigarettes A new machine that helps relieve the withdrawal symptoms of addicts is being tested. Sonja van Buul experienced it in person. I am fed up. I’m a cigarette smoker and I’ve decided to quit smoking, right now whilst testing a new “wonder machine”. Because I know how bad sm