Mj. Int. J. Sci. Tech. 2008, 2(01), 201-209
Maejo International
Journal of Science and Technology
ISSN 1905-7873
Available online at www.mijst.mju.ac.th Spectrophotometric flow-injection analysis assay of tetracycline
antibiotics using a dual light-emitting diode based detector
Prinya Masawat 1*, Saisunee Liawruangrath 2, and Suphachock Upalee 2
1 Department of Chemistry, Faculty of Science, Naresuan University 65000, Thailand 2 Department of Chemistry, Faculty of Science, Chiang Mai University 50200, Thailand * Corresponding author, e-mail : [email protected] Received: 21 November 2007 / Accepted: 14 February 2008 / Published: 22 February 2008 Abstract: In this paper, a small dual light-emitting diode (LED)-based detector for FIA
process analyser has been designed. The detector’s optical parts comprise a flow-through cell, a dual-blue LED and a photodiode. Neither mirrors nor lenses are used. The optical path for the first LED detects the blank, while the other LED detects the sample. The detector’s electronic components including a signal amplifier and an A/D converter are integrated on one small board connected to a PC for measuring the results. The designed spectrophotometric detector was used for the determination of tetracycline antibiotics. Uranyl acetate was used as a reagent forming orange-red complexes with the drugs in N,N– dimethylformamide. The complexes show absorption maxima at 410, 416 and 408 nm for tetracycline hydrochloride (TCH), chlortetracycline hydrochloride (CTCH), and doxycycline hydrochloride (DCH), respectively. The detection limit was found to be 0.38, 0.75, 1.44 µg mL-1 and the linear range was obtained at 1.0-3.0, 3.0-5.0, and 3.0-10.0 µg mL-1 for TCH, CTCH and DCH, respectively. The proposed method has been successfully applied to the determination of tetracycline antibiotic residues in milk samples. Moreover, this method is an environmentally friendly approach and suitable for routine analysis. Keywords: tetracycline, chlortetracycline, doxycycline, flow injection, light-emitting diode, 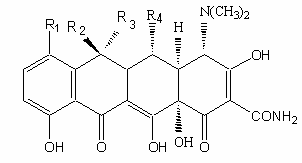 Mj. Int. J. Sci. Tech. 2008, 2(01), 201-209
Introduction
Tetracyclines are among the most important antibiotic families characterised by their wide ranges of antibacterial effects [1]. The structure of tetracycline and its derivatives are shown in Figure 1 and Table 1. This pharmacological family is used in human pathologies as well as in veterinary medicine, animal nutrition and feed additives for cattle breeding. Therefore, there is a continuing requirement for reliable, sensitive and selective procedures for their determination. Spectrophotometric methods are the most widely used for the determination of tetracyclines in bulk and pharmaceutical preparations [2-4]. They usually involve the formation of a coloured derivative compound in a multi-step reaction, which is occasionally tedious and highly time-consuming. The major drawbacks of spectrophotometric methods are the low sensitivity [3,4] and sometimes the slow development of the colour [4] or its instability [2]. Methods based on flow injection (FI) analysis with spectrophotometric detector have also been reported for the assay of tetracyclines [5-6], some of them with a high sampling frequency, although these methods are not very sensitive. The aim of this work is to develop a very simple and sensitive continuous-flow method for the determination of tetracycline, chlortetracycline, and doxycycline based on colorimetric reaction with uranyl acetate in N,N–dimethylformamide (DMF) using a dual light-emitting diode (LED)-based spectrophotometric detection. The use of LEDs in a flow-through cell is the key idea for miniature analytical devices. Moreover, the LED-based detector is less expensive and provides a performance which is as good as any commercial alternative. Figure 1. Structure of tetracycline
Table 1. Some tetracycline antibiotics according to Figure 1
Mj. Int. J. Sci. Tech. 2008, 2(01), 201-209
Materials and Methods
The hydrochlorides of tetracycline (TCH), chlortetracycline (CTCH), and doxycycline (DCH) were of HPLC grade and purchased from Sigma (USA). Their stock solutions (100 μg mL-1) were prepared by dissolving the appropriate amount of each hydrochloride salt in distilled deionised water. The solutions are stable for more than 1 month when kept at 40C and protected from sunlight. The standard solutions of the tetracyclines (TCs) were daily prepared from the stock solutions by careful dilution. The carrier solution (0.01M DMF) was prepared by diluting 0.4 mL of DMF (AR grade, Merck, Germany) to 500 mL with distilled deionised water. The reagent solution (100 μg mL-1 uranyl acetate) was obtained by dissolving 0.0100 g of UO2 [(CH3COO)2.2H2O] (AR grade, Merck, Germany) in the carrier solution and diluting to 100 mL in a volumetric flask. Na2EDTA-Mcllvaine buffer solution (pH 4) was prepared by dissolving 15 g of disodium hydrogen phosphate dihydrate (Merck, Germany), 13 g of citric acid monohydrate (Merck, Germany) and 3.72 g of EDTA (Merck, Germany) in water and diluting to 1 L. Florisil (0.150-0.250 mm) and oxalic acid were purchased from Merck (Germany). Acetonitrile (HPLC grade) was purchased from Carlo Erba (Italy). Fifteen milliliter of cow’s milk sample was diluted to 25 mL with Mcllvaine buffer-EDTA solution (pH 4) followed by centrifuging for 15 min, then only the supernatant was collected and passed through a Florisil syringe column. TCs were eluted from the column with 5 mL of 0.2 M oxalic acid : acetonitrile (4:1) then injected into the optimum FI-spectrophotometric system. The designed LED-based absorbance detector and flow manifold The design of the LED-based absorbance detector and flow manifold is shown in Figure 2. It consists of a peristaltic pump (Eyela MP3, Japan), and the sample or standard solution is injected via a Rheodyne 5041 rotary injection valve with a 135 μL sample loop. Tygon and teflon tubing (Elkay, Galway, Ireland) are used as a flow line for carrier (DMF) and reagent (uranyl acetate solution), and a Y-shaped connector is used for merging the streams. The sample containing a TC standard is injected then mixed with the carrier and the reagent solution forming an orange-red complex which passes through the laboratory-built flow-through cell. A dual super bright blue LED is used for producing monochromatic light for blank and sample solution. The signal generated is converted and integrated using the specially-made software program. 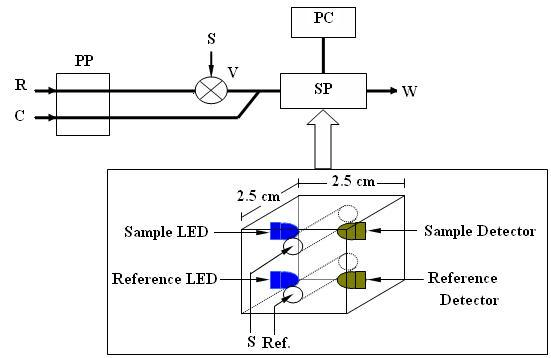 Mj. Int. J. Sci. Tech. 2008, 2(01), 201-209
Figure 2. Schematic diagram of the FI-spectrophotometry manifold: PP = peristaltic pump, C =
carrier (0.01 M DMF), R = reagent (100 µg mL-1 uranyl acetate), S = sample, V = injection valve with appropriate sample volume loop, SP = spectrophotometric detector, PC = personal computer, W = Results and Discussion
Optimisation of the flow injection system The orange-red complexes of the three TCs with uranyl acetate in DMF show absorption maxima at 410, 416, and 408 nm (for complex of tetracycline, chlortetracycline, and doxycycline, respectively) as exhibited in Figure 3. This is the reason for selecting the blue LED as the light source of the detector. Optimisation experiments were carried out using the manifold in Figure 2 by injecting the tetracycline standard at various concentrations. The variables, ranges studied and the optimum values are shown in Table 2. Since TC, CTC and DC are in the same antibiotic family and their reactive sites have the same chromophore and show nearly the same absorption maxima with uranyl acetate in DMF, indicating the common site structure reactive to uranyl interaction, therefore it can be assumed that these TCs give the same optimum conditions and thus the optimised conditions obtained with TC can reasonably be used for the determination of CTC and DC. Mj. Int. J. Sci. Tech. 2008, 2(01), 201-209
W avelength (nm)
Figure 3. UV-VIS spectra of the complexes of tetracycline hydrochloride (TCH), chlortetracycline
hydrochloride (CTCH), and doxycline hydrochloride (DCH) with uranyl acetate in DMF Table 2. Optimum conditions for determination of tetracyclines using the manifold in Figure 2.
Parameter studied Range studied Optimum value Uranyl acetate conc. (μg mL-1) 50-500 100 DMF conc. (M) 0.01-0.50 0.01 Effect of uranyl acetate concentration The influence of concentration of uranyl acetate between 50 and 500 μg mL-1 was examined. The highest analytical sensitivity was obtained when the concentration of uranyl acetate in 0.01 M DMF was 100 μg mL-1, above which the sensitivity decreased suddenly as shown in Figure 4. Therefore, in order to achieve maximum sensitivity, 100 μg mL-1 uranyl acetate was chosen for further study. The effect of DMF concentration on the analytical sensitivity for tetracycline using the laboratory made detector was studied. The highest sensitivity was obtained with the DMF concentration of 0.01 M (Figure 5). Thus, this concentration was chosen. Mj. Int. J. Sci. Tech. 2008, 2(01), 201-209
U r a n y l A c e t a t e C o n c e n t r a t i o n ( μ g / m L )
Figure 4. Relationship between uranyl acetate concentration and analytical sensitivity for tetracycline
al Se
tic
aly
D M F C o n cen tra tio n (M )
Figure 5. Relationship between DMF concentration and analytical sensitivity for tetracycline
The flow rate between 0.5-4.0 mL min-1 of the two lines, viz. reagent and carrier stream lines, was investigated simultaneously for tetracycline determination. As shown in Figure 6, the analytical sensitivity increases with an increasing flow rate of both streams. However when the flow rate is more than 1.0 mL min-1, the sensitivity decreases suddenly. This is attributed to incomplete reaction of tetracycline and uranyl acetate in DMF. So the flow rate of 1.0 mL min-1 was chosen. Mj. Int. J. Sci. Tech. 2008, 2(01), 201-209
cal Sensitivity
f lo w r a t e ( m L /m in )
Figure 6. Relationship between flow rate of carrier and reagent, and analytical sensitivity for
This study was carried out at three injection loop volumes, viz. low (67 μL), medium (135 μL), and high (271 μL) volume on the analytical sensitivity for tetracycline. The representation of low, medium and high volume of injection has been established by varying a retain loop. Though many loops have been tested, the results could not be calculated because of the fluctuation of the signal. The lower bound loops gave dilution while the upper bound loops yielded fluctuations. These results could not be calculated because of high variant in deviation. Only three of them gave satisfactory results with good deviations. It was found that the highest sensitivity was obtained at 135 μL sample loop as exhibited in Figure 7, therefore it was chosen as optimum. Under the optimum conditions (Table 2), calibration graphs were obtained for tetracycline, chlortetracycline, and doxycycline with the linear range at 1.0-3.0, 3.0-5.0, and 3.0-10.0 µg mL-1 for The proposed laboratory-made LED-based spectrophotometric detector was evaluated by carrying out tetracycline, chlortetracycline, and doxycycline determination in milk samples before and after spiking with TCs standards at various concentration ranges. The calibration graphs obtained demonstrated that the analytical sensitivity was significantly enhanced and that the linear ranges at lower concentration and the limit of detection of these drugs were better than those obtained without passing through the Florisil syringe column (Table 3). Table 4 shows the precision and the recovery data obtained on cow’s milk samples. These data demonstrate that the proposed method has a good potential for the determination of TCs in real samples. Mj. Int. J. Sci. Tech. 2008, 2(01), 201-209
nsitivity
In jectio n V o lu m e (μ L )
Figure 7. Relationship between injection volume and analytical sensitivity for tetracycline
Table 3. Linear ranges and detection limits for the determination of tetracycline antibiotic residues in
milk samples with and without preparation by using Florisil syringe column followed by flow injection Table 4. Recoveries for TC-fortified milk

Drug driving fact sheet During 2008, alcohol and other drug use were identified as a factor in 126 deaths on Queensland roads, or 38.4 per cent of the Queensland road toll†. To combat these statistics, the Queensland Government passed legislation to enable police to undertake random roadside saliva testing for illegal drugs from December 2007. †Statistics on drugs and alcohol