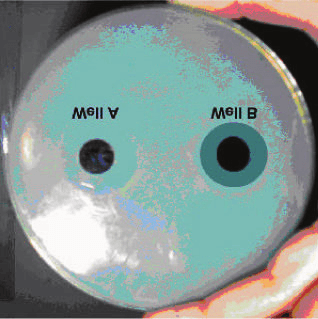 MICs of S–W D™, four antibiotics and combinations thereof Figure 2.
MRSA inhibition with Penicillin-G alone (Well A), and in combination with Silver–Water Dispersion® (Well B).
combinations of the four as reported. The FIC index re- behind a host of resistant organisms in the system. These ported in Table 3 is calculated favouring a minimum resistant organisms reappear at a later date straining the value of Silver–Water Dispersion®. When the inhibition immune system. Figure 2 shows Penicillin-G (10 units) is seen from the antibiotic side, the FIC index may be differ- (well A) and Penicillin-G (10 units) in combination with ent. As seen in Figure 1, using an antibiotic of 50 mg/ml Silver–Water Dispersion™ solution (32 ppm) (well B).
and Silver–Water Dispersion® of 3 ppm for the inhibitory Well A inhibition zone is not clear and displays the pres- combination, the FIC index is 1.25 and not 1.4 as reported in ence of resistance to Penicillin-G. Whereas well B having a combination of Penicillin-G and Silver–Water Disper- Table 2 shows that silver is mostly additive to the anti- sion™ demonstrates the powerful clearing ability of Sil- biotic efficacy. In the combinations examined, it is indepen- dent in its bacterial activity except for five out of 96 It is clear that the combination will allow a more complete synergistic combinations. It is also shown to have two clearing of the pathological organism.
combinations which appeared antagonistic. These two 1. Futuyma, D. J., Science on Trial, 1983.
2. Konmen, E., Allen, S. D., Janda, W. M., Schreckenberger, P. C. and To validate the results of Amoxicillin antagonism, Winn, Jr. W. C., Color Atlas and Textbook. (Diagnostic Microbio- 30 mcg dilution of Amoxicillin was prepared in Silver– logy), 1975, 5th edn, pp. 816–844.
Water Dispersion™ (32 ppm) solution. 100 ml of this 3. Bauer, Kirby, Sherris, Turck, Am. J. Clin. Pathol., 1966, 45, 493.
combination was added to a single well, and kept for dif- 4. National Committee for Cultural and Laboratory Standards, Per- formance standards for antimicrobial disc susceptibility tests ed. 4 fusion followed by incubation. No antagonistic effects were noted under these conditions as the zone of inhibitionobserved was 19 mm, comparable to 20 mm with a Silver– Water Dispersion™ and 21 mm with Amoxicillin.
by Meghshree Deshmukh and Ms Zeenal Shah.
Many a times, antibiotics may cause symptoms in patients Received 16 May 2006; accepted 12 June 2006 to temporarily disappear and yet the antibiotics may leave CURRENT SCIENCE, VOL. 91, NO. 7, 10 OCTOBER 2006

2007 Prescription Drug List Reference Guide IMPORTANT NOTICE – PLEASE READ This reference guide will help you understand CAREFULLY these choices. It will also enable you to ask your doctor or pharmacist the right questions Your Prescription Drug List (formerly known regarding your medication needs. Our goal is as Preferred Drug List) has changed. Please to provide info