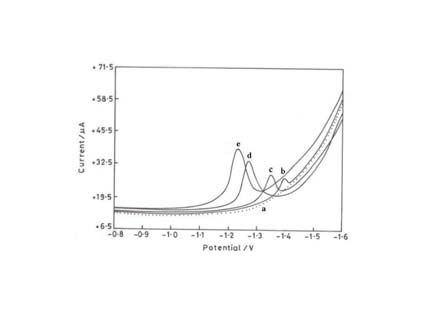 216th ECS Meeting, Abstract #2903, The Electrochemical Society
determination of triamcinolone, a synthetic A comparison of the voltammetric behavior between SWNTs modified EPPGE and fullerene - C60 modified EPPGE indicated that SWNTs modified EPPGE is more sensitive. The electrode exhibited an effective catalytic Rajendra N. Goyal*, Sanghamitra Chatterjee
response with good reproducibility and stability. The effect of several parameters such as pH, square wave Department of Chemistry, Indian Institute of Technology frequency and steroid concentration were studied. The square wave voltammetric response of the electrode to triamcinolone is linear in the range 0.1 - 25 nM with a detection limit and sensitivity of 8.9 × 10-10 M and 2.06 Triamcinolone chemically known as 9α – fluoro -11β, µA nM-1 respectively. The method was applied for the 16α, 17α, 21 – tetrahydroxy -l, 4 – pregnadiene - 3, 20 – determination of triamcinolone in several commercially dione (I) is a synthetic steroid of the glucocorticoid
available pharmaceuticals and real urine samples obtained family which is a mimic of natural hydrocortisone. It is from patients undergoing pharmacological treatment with one of the several derivatives of hydrocortisone widely triamcinolone. A comparison of the observed results with used in medical practice. It is an anti-inflammatory drug HPLC analysis indicated a good agreement. The product which is applied to the skin to relieve irritation, rashes obtained after reduction of triamcinolone was also and infection. It is used in the treatment of allergic characterized using 1H NMR and GC-MS and the site of disorders, ulcerative colitis, arthritis, lupus, psoriasis, skin reduction is found to be carbonyl group at position 20. The method described is rapid, simple and accurate and can be easily applied for detecting cases of doping. The method has an advantage that the common metabolites present in biological fluids do not interfere even when present at concentration 100 times more than triamcinolone due to the fact that determination is based Due to potential positive effects on sport performance and
the associated toxicological risks, the systemic
administration of glucocorticoids has been forbidden by
the International Olympic Committee (IOC) and World
Anti Doping Agency (WADA) so that synthetic
glucocorticoids including triamcinolone (I) are presently
included in the list of doping agents. An edge plane
pyrolytic graphite electrode (EPPGE) modified with
single - wall carbon nanotubes (SWNTs) has been used in
the present studies as a sensor to determine triamcinolone,
abused by athletes for doping. The surface of the modified
electrodes was characterized by SEM. A well-defined
reduction peak was observed at bare EPPGE having Ep
~1346 mV, whereas at fullerene modified EPPGE, the
peak was observed at ~1268 mV. The EPPGE modified
with SWNTs further shifts the Ep to less negative
potential to 1232 mV as shown in Fig 1.
Fig 1- A comparison of square-wave voltammograms of 10 nM triamcinolone at pH 7.2 at (b) bare basal plane pyrolytic graphite electrode (BPPGE), bare EPPGE (c), fullerene modified EPPGE (d) and SWNTs modified EPPGE (e). Curve (a) is the background phosphate buffer solution (pH 7.2) at SWNTs modified EPPGE.

SISC CO-PAYMENT REFERENCE GUIDE Medco manages your prescription drug benefit at the request of SISC. Your plan gives you the option of getting your covered medications through the Medco Pharmacy ® mail-order service or at a participating retail pharmacy. The chart below provides a summary of your prescription drug benefit co-payments. When you use a participating When you use the T