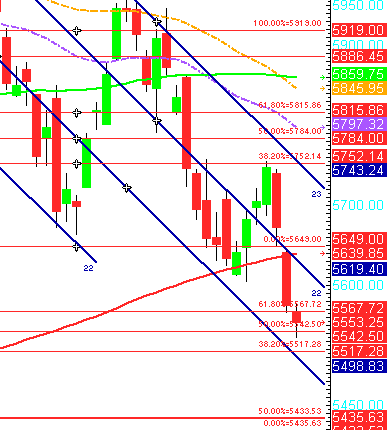 APRIL 08, 2013
Nifty Outlook
NIFTY Critical Level
The Indian markets are expected to open down on weak global cues.The NSE Nifty after the initial volatility it may try to hold above its first support at 5532.Below this,the benchmark could find the major support at 5512.The Critical level on the upside is at 5568 and above this,it might move towards the resistance at 5588.The major resistance above this level could be at 5608 FII Net Trade Cash Market (Cr) -203
FII Net Trade Stock Futures (Cr) 119
FII Net Trade Index Futures (Cr) -1106
DII Net Trade Cash Market (Cr) 21.4
200 EMA 5673
100 EMA 5794
14 EMA 5707
21 EMA 5738
14,565.25
Global Markets
3,203.86
US: Stocks fell on Friday, with their worst weekly drop this year
S&P500
1,553.28
after a weaker-than-expected US jobs report weakened the confidence in the economy. Hiring was at its slowest pace in nine 6,249.78
months, with non-farm jobs growing by only 88,000 in March. 3,663.48
EUROPE: European stock markets on Friday dropped the most
7,658.75
since November,as weaker-than-expected growth in US non-farm payrolls and the European Central Bank said risks remain to the Nikkei225
13,116.99
euro area's recovery. Airline stocks fell the most in Europe, on Singapore
3,295.68
rising fears that the bird-flu virus would impact air travel. Hangseng
21,704.26
ASIA: Most Asian markets are subdued in early trade today, but a
report that the Bank of Japan would implement its bond buying 7,786.68
plan to tackle deflation this week helped the Nikkei rise 2%. 1,926.65
2,183.45
TOP EVENTS TODAY:
BHEL to detail provisional result for 2012-13. 1215 IST
Brent Crude $
Dollar Index $
SC to hear Bharti Airtel CMD Mittal's plea against 2G court's summon in excess spectrum case. Indian Rupee
GERMANY Industrial Production Index for February. 1530 IST 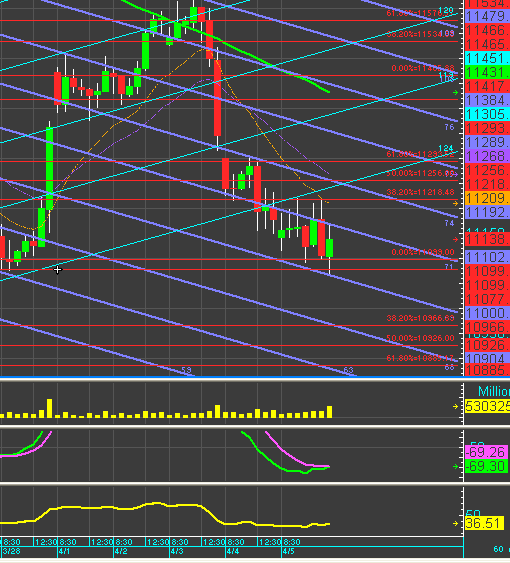 ASHOK LEYLAND: A consortium of the company and LARSEN & TOUBRO has emerged as the lowest bidder for a 1-bln-rupee truck contract from the Indian Army. BANK OF BARODA: Has denied media reports of purported illegal transfer of funds through its Nassau branch in Baha mas. RE: Arm Bilcare Technologies has decided to sell around 26% stake to an strategic or financial partner to CADILLA HEALTHCARE: Has recalled select batches of its anti-depressant tablet, venlafaxine hydrochloride, COAL INDIA: Workers have threatened to go on an indefinite strike if the government goes ahead with its plan to sell more equity in the company. Some 36 projects of the company in Maharashtra, with estimated production capacity of 17.7 mtpa, have become unviable. OWER & INFRASTRUCTURE: Australia may review the environmental clearances given to the $10 bln pit-to-p ort project being developed by GVK Group. IDEA CELLULAR: The company and its subsidiary, Aditya Birla Telecom, face a tax demand of 39 bln rupees over transfer of assets and licences between the two companies in 2009. MAHIN DRA HOLIDAYS & RESORTS : Has set the share sale price band for its 4.1-mln-share institutional placem ent programme at 225-265 rupees a share. MARUT I SUZUKI : The competition watchdog has found that the company's agreements with its component suppliers are anti-competitive. The company may face a maximum fine of up to 3400 cr. RELIANCE COMMUNICATIONS: Will sell an 80% stake in arm Reliance Globalcom to a consortium led by Bahrain Telecommunications for around 60 bln rupees. SREI Infrastructure Finance: Has been granted in-principle permission by the RBI to set up white label VAKRA NGEE SOFTWARES: Has been granted in-principle permission by the RBI to set up white label automa ted teller machines.
BankNiftyFut Hourly

Prepared By:
Binu Joseph
Product Team
Equity Research
Disclaimer:
This document has been prepared by JRG Securities Ltd.
The information presented in this document shall not be regarded as an offer/recommendation to buy or sell securities. There is the risk of
loss involved in using the information for investment purpose. The readers are urged to exercise their own judgment in investment and
trading.
There are rates, based on Technical levels. . Opinions expressed in this article are the independent views of the author(s). The information,
opinions and analysis contained are collected from sources believed to be reliable, but no representation, expressed or implied, is made as
to its accuracy, completeness or correctness.
STRICTLY FOR PRIVATE CIRCULATION ONLY. Unauthorized use, disclosure, distribution or copying of this private email by
anyone other than the intended recipient is strictly prohibited.
Any major fundamental news or market sentiment can make these levels irrelevant or ineffective
JRG Securities Ltd
Plot No - 115/22/23/25,Ground Floor, West block, Surana Financial Park,
Nanakramguda, Gachibowli, Hyderabad, Andhra Pradesh 500032.
Landline : 040 3350 2451 http://www.inditrade.com/