the bird could have been migrating (http://www.kolkatabirds.com).
Bird Conservation Nepal (BCN), with support from other Chinthaka Kaluthota reported the ringing of a Sand Martin organisations like Britain’s Royal Society for the Protection of Riparia riparia and White-cheeked Tern Sterna repressa at Bundala Birds (RSPB) has opened a novel concept, a restaurant for National Park, Sri Lanka, during a ringing session between 9th vultures—known as Community Managed Jatayu Restaurant. Its December 2008 and 14th December 2008 (http:// main objective is to provide safe food sources for vultures and srilankabirds.blogspot.com). Jugal Tiwari reported 500 Crab at the same time improve the livelihood of the local community Plovers Dromas ardeola, 30 Sociable Lapwings Vanellus gregarius through tourism promotion and other income generation and seven Cream-coloured Coursers Cursorius cursor from different parts of Gulf of Kutch in Gujarat during November The project buys elderly or sick cows from farmers, looks 2008. (OrientalBirding). David Stanton reported 21 White-rumped after them humanely and treats them, if necessary, with the Vultures Gyps bengalensis near Beijnath, Kanga Valley, Himachal safe drug, Meloxicam. Once a cow dies, one of the project Pradesh on 21st September 2008 (OrientalBirding). Clement staff, mainly villagers, wheels the carcass on a tricycle cart Francis and others reported Rufous-tailed Shrike Lanius into the vulture restaurant. The ‘restaurant’ is a big grassy [isabellinus] phoenicuroides in December 2008 from Nandi Hills, area surrounded by tall, fragrant sal trees. Only the cattle Bangalore and later the same got reported from more localities skeletons scattered around break the peaceful scene - and the around Bangalore (Bngbirds). Sheshadri K. S. shared pictures vultures nestled above. Nepali ornithologists have established of Grey-breasted Laughingthrush Garrulax jerdoni meridionalis, it as a place where vultures can eat healthily. Several villagers which he photographed from the higher reaches of Kalakkad- serve as volunteers on the project committee.
Mundanthurai Tiger Reserve (KMTR) in Tamil Nadu, these BCN now wants to open more ‘vulture restaurants’—and being the first photos of the subspecies to be uploaded scientists in India too are now showing keen interest in this in OrientalBirdImages. (www.orientalbirdimages.org).
idea. (http://www.birdlifenepal.org.).
S. Chandrashekaran reported sighting nearly 200 vulturescomprising White-rumped, King Sarcogyps calvus and Egyptian Neophron percnopterus feeding on carcasses of two feral buffaloesin Sathyamangalam forest division, Tamil Nadu, in December The 2008 edition of ‘Rare birds yearbook’ was a success according 2008 (http://www.hindu.com). On 16th November 2008, P. P.
to reviews from all over the globe and on 15th November the Sreenivasan reported the first breeding record of about ten totally revised 2009 edition was published. It features 190 Painted Storks Mycteria leucocephala in Kerala (Thrissur district) Critically Endangered—according to the latest IUCN redlist— (KeralaBirder). P. C. Rajeevan and K. V. Uthaman photographed Tufted Aythya fuligula and Ferruginous A. nyroca Duck at Over 130 photos of the world’s rarest birds, taken by both Katampally, Kannur on 2nd December 2008 (KeralaBirder). Adesh amateur and professional photographers worldwide, have Shivkar reported a Malabar Trogon Harpactes fasciatus (Fig. 1.) been replaced since last year. A selection of a number of in its northern most range at Vansda National Park in Gujarat.
endangered species, illustrated with nice photos, is presented He also reported a male Rosy Minivet Pericrocotus roseus in a special feature. The species texts have been fully updated amongst a minivet flock in November 2008 during the same in the majority of cases and are accompanied by distribution trip (BirdsofBombay). Vaibhav Deshmukh reported an adult maps. The updated species-per country list can still be found Imperial Eagle Aquila heliaca near Alibag, Maharashtra on 25th here and the threats to each species are graphically presented November 2008 (BirdsofBombay). Three European Rollers Coracias garrulus were photographed in Uran, near Mumbai by The ‘Rare birds yearbook’ is a “Species Champion” which Girish Vaze on 25th October 2008 (http://indianaturewatch.net).
means that a considerable share of sale-proceeds goes to Pratap Singh Sangwan reported a Spotted Creeper Salpornis saving the birds it covers. (http://www.rarebirdsyearbook.com.).
spilonotus from Ranthambore on 24th December 2008 (Delhibird).
And to cap it all, Sayam U. Chowdhury reported the exciting news of the sighting of eight Spoon-billed Sandpipers David Stanton reported an exciting encounter with a juvenile Eurynorhynchus pygmeus, during Asian Waterbird Census, at Great Frigatebird Fregetta minor on 23rd August 2008 while Beleka Dia in Sonadia Island, Bangladesh on 29th January 2009 paragliding around Anjuna beach, Goa (OrientalBirding). Sachin Shurpali reported a single White-bellied Sea Eagle Haliaeetusleucogaster in July 2008, from deep inland area of Bhadra Travancore–Cochin Survey: tracing the footsteps of Dr. Sálim Reservoir in Bhadra Tiger Reserve, Karnataka (BngBirds).
Santosh Martin and friends reported a juvenile Great Indian Following in the footsteps of Dr Sálim Ali, who surveyed birds Bustard Ardeotis nigriceps alongside an adult at Siruguppa taluk in Kerala for the first time 75 years ago, Kerala Forest and of Bellary district, northern Karnataka on 23rd July 2008, Wildlife Department and Kerala State Biodiversity Board are indicating possible breeding around that area (BngBirds). Sumit joining hands in undertaking a repeat bird survey in 2009.
Sen and others reported a Steppe Buzzard Buteo buteo vulpinus In 1933, it was the Maharaja of the erstwhile Travancore from Bhutan in November 2008 at over 3,353 m. They believe State who initiated the scientific survey of the birds and their Indian Birds Vol. 4 No. 4 (July–August 2008) 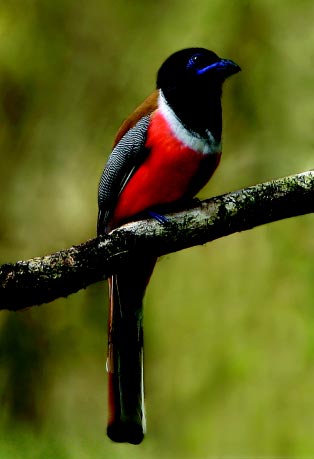 habitats in the State with the involvement of the Bombay International agreements for bird conservation Natural History Society (BNHS). Dr Sálim Ali led the survey In an attempt to plug the weak link of conserving migratory with the assistance of the then curator of the birds that are trans-continental, an international agreement Thiruvananthapuram Zoo N. G. Pillai. They started the survey have been framed to ensure all nations rally together in the on 3rd January 1933, and completed it on 31st December of conservation of migratory birds of prey and owls. Strong international measures to protect over 70 species of migratory This repeat survey is planning to do exactly what Dr Ali did, birds of prey and owls were agreed on 22nd October 2008 at sticking to the same dates, periodicity of survey and localities Abu Dhabi. The new measures will help protect migratory of observation, but using all modern gadgetry and field raptors from threats such as habitat loss and degradation, techniques. Lead by C. Sashikumar, the survey team consists persecution, accidental killing, and climate change. Following of five full time project staff to study ornithology, vegetation a joint initiative by the governments of the United Arab Emirates and sociological aspects of the study area.
and United Kingdom, a Memorandum of Understanding has The survey, which began on 3rd January at Marayur shall been drawn up that will coordinate the protection of migratory end on 31st December 2009. The idea is to compare the findings birds of prey and owls found in Europe, Africa and Asia. This of 1933 and the situation 75 years later, to study the changes important agreement will help ensure that migratory birds of that have come about in the various parameters of bird prey and owls, including some of the world’s most charismatic life and their habitats in Kerala. More details can be gleaned and threatened species, have a safer passage during their h t t p : / / w w w. h i n d u . c o m / 2 0 0 9 / 0 1 / 0 1 / s t o r i e s / epic annual journeys. More news can be found at http:// www.birdlife.org/news/news/2008/10/cms_mou2.html.
House Sparrow in airportsAre House Sparrow Passer domesticus numbersreally going down? As if to add fuel to thisdilemma, House Sparrows have colonised manyairports around the country. News started tospread from their presence in the newlyconstructed Bangalore International Airport,which triggered a lot of reaction countrywide, ine-groups, about their strong presence at otherairports like Hyderabad and Mangalore. Varioushypotheses were floating around on how theyfind such surroundings easy to adjust to whileseemingly having trouble holding on to busy cityenvirons. Speculation also floated around on thepossible nuisance their presence creates forairport authorities and the fear that theauthorities might take drastic measures thatwould prompt sparrows to abandon the airports.
However, birding groups have gone further andare now appealing to make a pair of HouseSparrows as the logo of BIAL airport inBangalore (BngBirds, TamilBirds, BirdsofBombay).
Tracking Bar-headed Geese migration usingsatellite telemetryLast year we had the whole world tracking Black-tailed Godwits Limosa limosa in the Pacific throughInternet, later we had two Black Storks Ciconianigra closer home in Maharashtra. In January2009, we now have over 60 migratory ducks andgeese with transmitters marked in Tamil Naduand Orissa as a part of multi-nationalcooperation in studying wild birds and avianinfluenza. All of them could be tracked daily overthe Internet from the following website: http://www.werc.usgs.gov/sattrack/india/overallmaps.html.
The study of the non-breeding (wintering)grounds for waterfowl allows identification ofareas where a broad range of speciescongregate. These sites of spatial overlap in migratory flyways are associated with a highdensity of bird species providing conditions that might be conducive to the transmission and Fig. 1. Malabar Trogon Harpactes fasciatus.
Indian Birds Vol. 4 No. 4 (July–August 2008)

Benefits of Non-GMO Soy Protein to Bodybuilders and Athletes, ViSalus Question: What are the advantages of non -GMO soy protein (non- genetically modified), and why does the protein content of the Visalus Vi- Shape Nutritional Shake have such a low protein content. Surely 12 grams protein is only half of what is recommended? Also, what benefits does soy protein offer over other types of protei