Malaria Chemoprophylaxis Compliance Improvement: A New ApproachKelly J. Moynihan;a Jean-Marie M. Moreau;b Leba G. Shallenberger;b Kenneth C. Lindemann;b and Philippe Guibertc 1 Copyright 2004, Society of Petroleum Engineers Inc.
immune workers decreased fifty percent and the program has This paper was prepared for presentation at The Seventh SPE International Conference on been extended to other operating locations in Africa.
Health, Safety, and Environment in Oil and Gas Exploration and Production held in Calgary,Alberta, Canada, 29–31 March 2004.
Introduction
This paper was selected for presentation by an SPE Program Committee following review ofinformation contained in a proposal submitted by the author(s). Contents of the paper, as ExxonMobil conducts business in over 100 countries presented, have not been reviewed by the Society of Petroleum Engineers and are subject tocorrection by the author(s). The material, as presented, does not necessarily reflect any worldwide. In some of these countries (especially those in position of the Society of Petroleum Engineers, its officers, or members. Papers presented at sub-Saharan Africa, parts of south east Asia, and Latin SPE meetings are subject to publication review by Editorial Committees of the Society ofPetroleum Engineers. Electronic reproduction, distribution, or storage of any part of this paper America), one or more forms of malaria are endemic.2 for commercial purposes without the written consent of the Society of Petroleum Engineers is In order to safeguard its employees from the ill effects of prohibited. Permission to reproduce in print is restricted to a proposal of not more than 300words; illustrations may not be copied. The proposal must contain conspicuous malaria, ExxonMobil developed and implemented a acknowledgment of where and by whom the paper was presented. Write Librarian, SPE, P.O.
Box 833836, Richardson, TX 75083-3836, U.S.A., fax 01-972-952-9435.
comprehensive Malaria Control Program (MCP) based on thefollowing "ABCD" strategy:3 Abstract
Awareness training, personal protection against mosquito bites, and vector control measures are all important in helping Chemoprophylaxis use by non-immune individuals.4 reduce Anopheles mosquito bites. However, these measures cannot completely eliminate the risk of contracting malaria.
This paper discusses the Chad Export Project's5 The prevention of malaria in non-immune individuals in sub- implementation of the MCP and in particular the development Saharan Africa relies heavily on the proper use of effective and implementation of a Malaria Chemoprophylaxis chemoprophylaxis. Compliance with effective Compliance Program (MCCP), a MCP enhancement aimed at chemoprophylactic regimens is problematic, especially in ensuring effective malaria chemoprophylaxis use by non- long-term expatriates who believe they have acquired natural immune individuals in order to achieve the MCP's goal of zero immunity. In spite of implementing a comprehensive Malaria Control Program (MCP), with a goal of zero cases of malariaamong non-immune individuals, the Chad Export Project Chad Export Project - Background
experienced an increase in the number of malaria cases in thecontractor non-immune workforce as construction activities in Project Description and Background Information. The
Chad and Cameroon accelerated. Several serious cases of $US 3.5 billion Chad Export Project (the Project) is currently Falciparum malaria were recorded, and four fatalities the largest private sector investment in sub-Saharan Africa.
occurred. In response to this, a multidisciplinary team was Over the Project's anticipated 25-30 year life, approximately formed to identify opportunities to enhance the effectiveness one billion barrels of crude oil will be produced from three of the MCP. One of the team's key recommendations was to oilfields in the Doba basin region of southern Chad for export develop and implement a Malaria Chemoprophylaxis to world markets, with peak production being 225,000 barrels Compliance Program (MCCP) to address identified informational and behavioral shortcomings regarding malaria A map providing some geographic context for the Project chemoprophylaxis use. The heart of the MCCP is awareness and education but compliance with chemoprophylaxis is further encouraged through collection of urine specimens from There are four Anopheles mosquito-transmitted parasites that cause malaria: Plasmodium falciparum, Plasmodium vivax, Plasmodium ovale, and non-immune individuals for laboratory determination of Plasmodium malariae. Malaria caused by the Plasmodium falciparum parasite effective anti-malaria medication usage. Data collected during is the most serious form of the disease and is the most prevalent type of the first 15 months that the MCCP was implemented in Chad and Cameroon show an overall low (i.e., <1%) rate of non- ExxonMobil's Malaria Control Program is based on a Malaria Control Program developed in 1998 for the ExxonMobil-led Chad Export Project. The conforming specimens. After implementing the MCCP in ExxonMobil program was implemented worldwide beginning in 2001.
Chad and Cameroon, the rate of malaria cases among non- 4 With regard to malaria, non-immune individuals are defined as thoseindividuals who were not born and raised in the malarious country/region in 1 aExxonMobil Development Company, Houston, Texas; bExxonMobil 5 ExxonMobil has a 40% interest in the Chad Export Project and is the Medicine and Occupational Health, Houston, Texas; cInternational SOS operator. Other Project Consortium members include Petronas (35% interest) 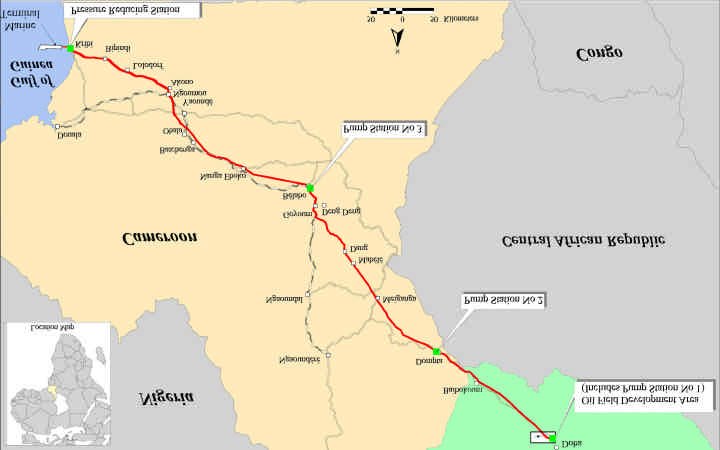 K.J. MOYNIHAN; J-M.M. MOREAU; L.G. SHALLENBERGER; K.C. LINDEMANN; AND P. GUIBERT Figure 1. Geographic Context for the Chad Export Project
Planning for the Chad Export Project began in 1993, with Key Project components in the oilfield development area construction beginning in October 2000. The first crude oil (from the Miandoum oilfield) was produced in July 2003, and the first sale of oil to international markets occurred in − Komé, Miandoum, and Bolobo oilfields - October 2003. Completion of the Project's Central Treating approximately 250 wells will be drilled to develop Facility (CTF) in the oilfield development area is anticipated and recover the hydrocarbon reserves in these by year-end 2003, with full production commencing in 2004.
− Gathering system to collect and transport produced Climatic Setting With Regard to Malaria. The climate in
the portions of Chad and Cameroon traversed by the Chad − Central Treating Facility to produce export quality Export Project's crude oil export pipeline can be characterized as being semi-dry sub-tropical to moist tropical.
− Operations Center located in the Komé field, Two seasons exist in the oilfield development area in consisting of the CTF, an airstrip, housing for 200 southern Chad - a long dry season (October - May) and a short individuals, and a 120 MW power plant to serve rainy season (June - September). During an average rainy season, approximately 1000-1100 mm of rainfall occurs.
Along the pipeline route from Komé, Chad to Kribi, − 1070 kilometer long 760 mm diameter buried export Cameroon, the rainy season progressively lengthens. For pipeline from Komé, Chad to Kribi, Cameroon.
example, average annual rainfall near Meiganga, Cameroon − Three pump stations - Pump Station #1 adjacent to (~325 km southwest of Komé, Chad) is 1500-1600 mm, and at the Central Treating Facility in the Komé oilfield, Lolodorf, Cameroon, the mean annual rainfall is Pump Station #2 near Dompta, Cameroon, and Pump approximately 1700 mm. In the coastal area near Kribi, Cameroon, two rainy seasons actually exist, resulting in a − Pressure reducing station near Kribi, Cameroon.
mean annual rainfall in excess of 2500 mm.
Climate and rainfall, coupled with the remoteness of many Floating Storage and Offloading vessel (the Komé locales and the developing nation status of both Chad and Kribi 1), a 2 million barrel converted tanker fixed in Cameroon, result in a suitable environment for the malaria place approximately 12 kilometers offshore via a parasite's transmission vector, the Anopheles mosquito. The 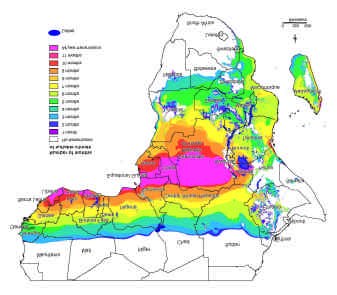