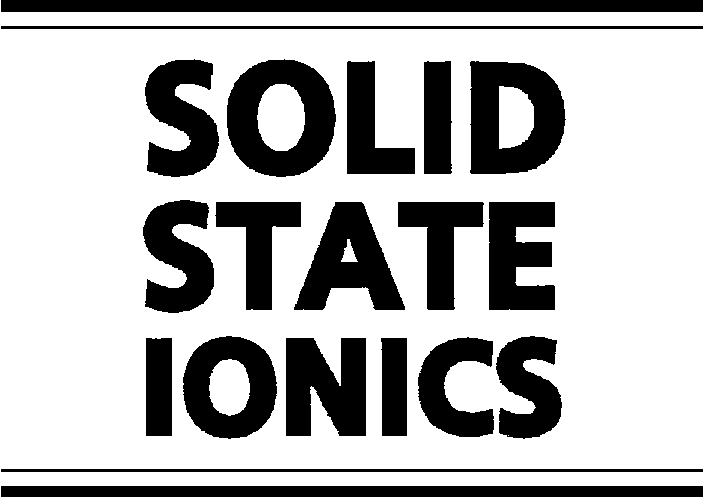 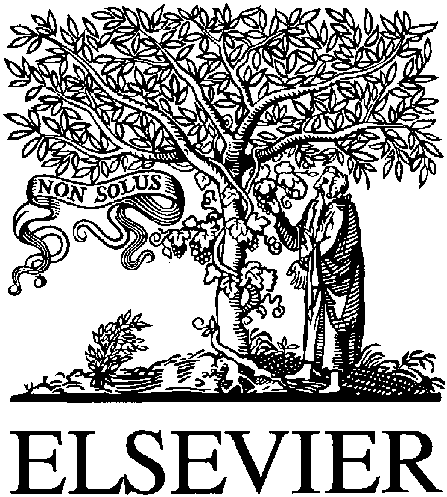 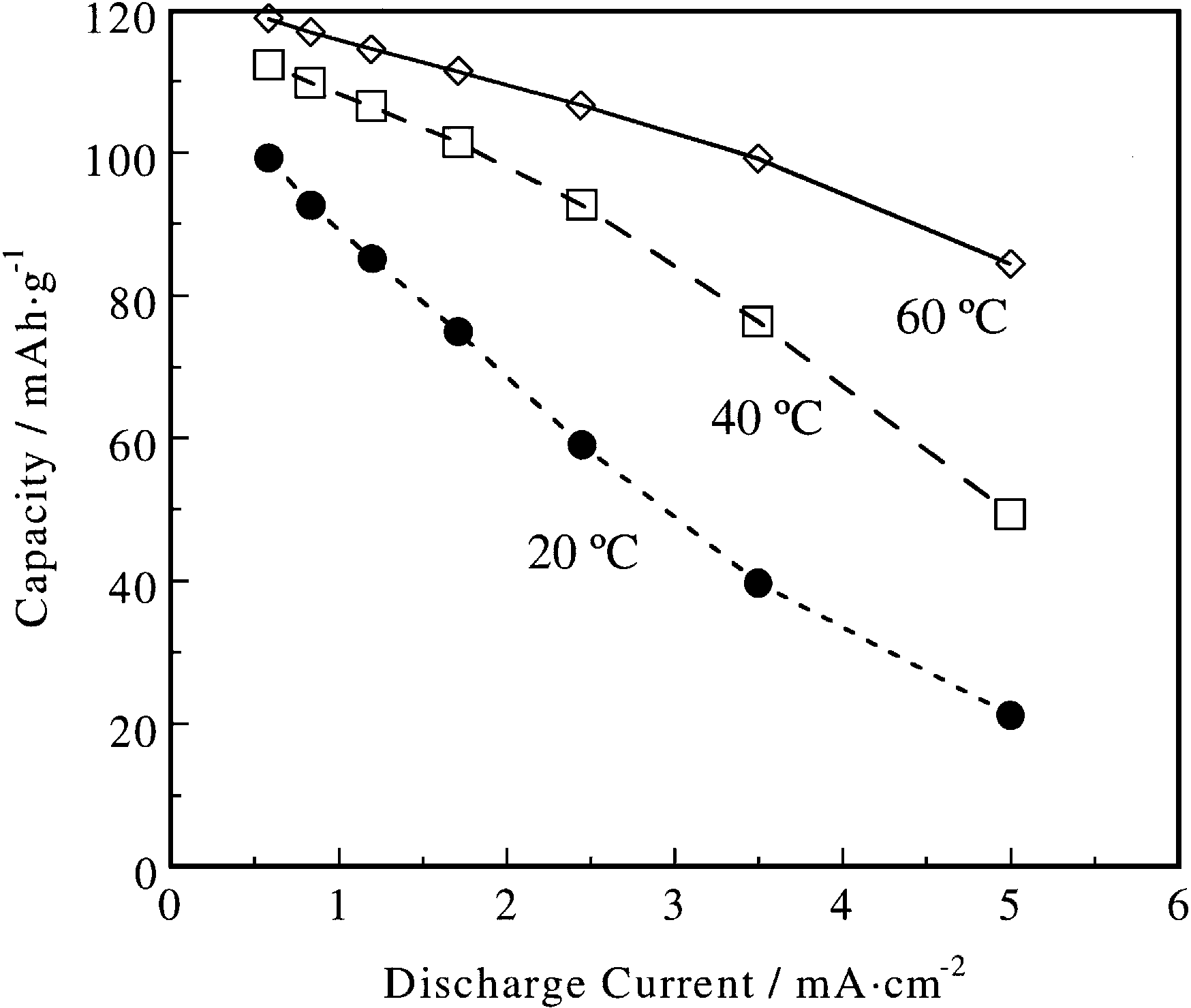 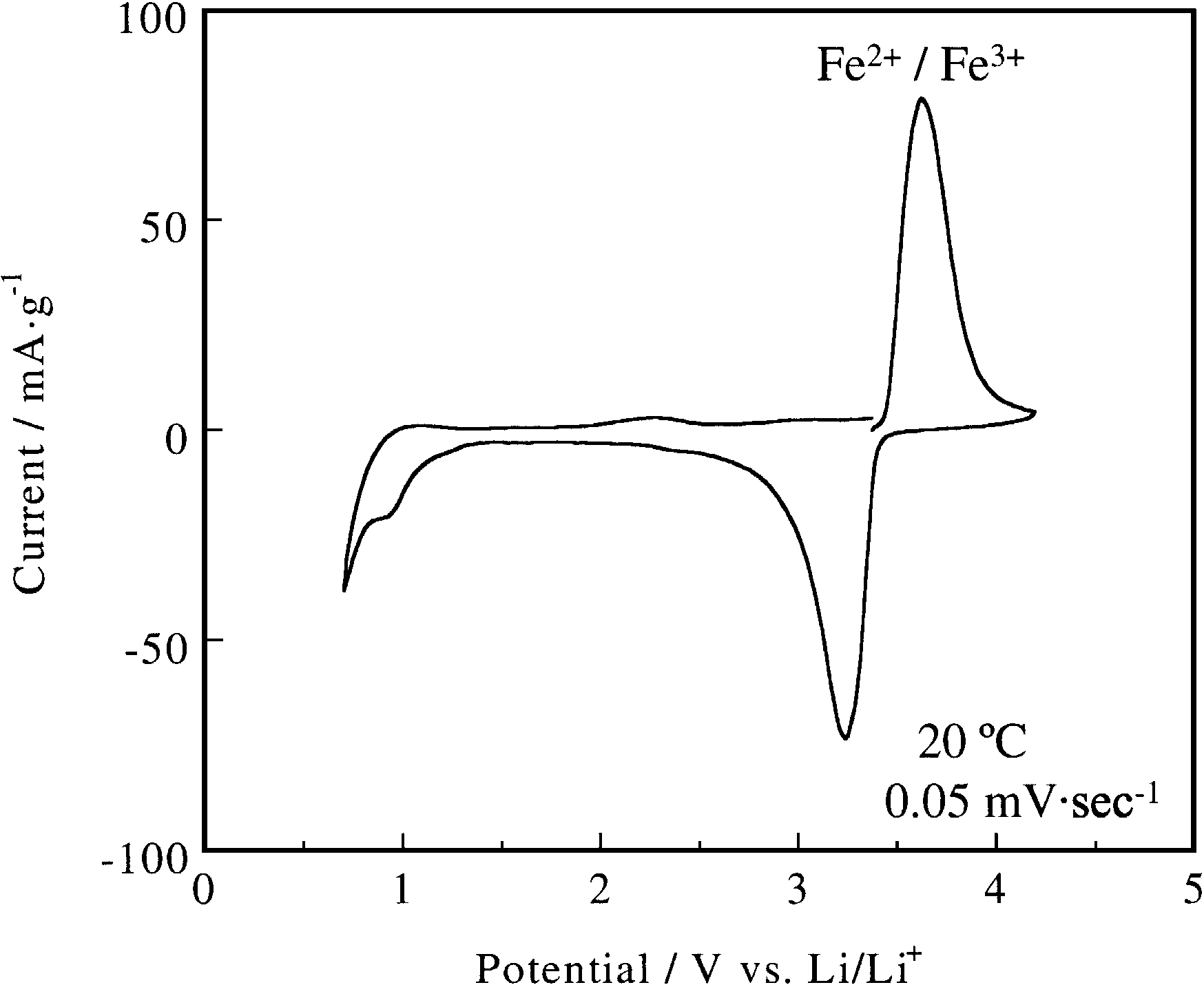 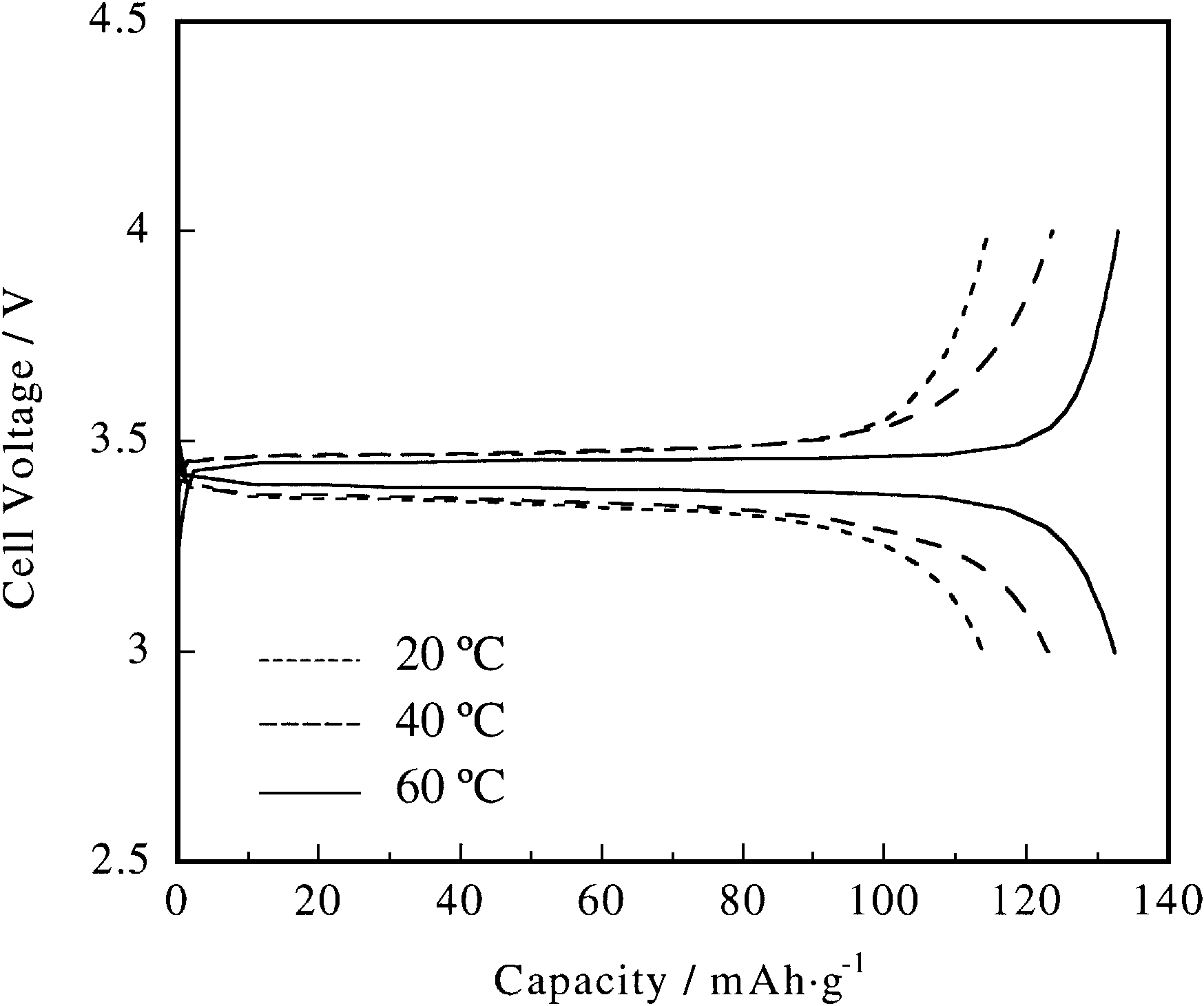 M. Takahashi et al. / Solid State Ionics 148 (2002) 283–289 resistance with a change cell temperature had littleeffect on the capacity of Li/LiFePO4 cells.
The cell temperature also affected the current dependence of the capacity. Fig. 2 shows the effectof the discharge current on the cell discharge capacitymeasured at 20, 40 and 60 jC, respectively. Themeasurement was carried out after 10 charge– dis-charge cycles. At 20 jC, the capacity decreasedabruptly while the discharge current increased andthe capacity at 5 mAÁcmÀ2 became about 20% of thatat 0.5 mAÁcmÀ2. By contrast, the capacity decreasewith increasing current became gentle as the temper-ature rose. At 60 jC, the capacity at 5 mAÁcmÀ2 wasabout 70% of that at 0.5 mAÁcmÀ2 This result alsosupports the idea that the large discharge capacity ofLiFePO4 observed at elevated temperatures is caused Fig. 1. Charge and discharge curves of the Li/LiFePO4 cells at the by the high lithium diffusion rate in LiFePO 2nd cycle, measured at 20, 40 and 60 jC and with a current of 0.5 We investigated the influence of the cell temper- ature on the diffusion rate of the lithium in LiFePO4 byusing cycle voltammetry. Fig. 3 shows a cyclic vol- reaction. The length of the plateau, which extended tammogram of LiFePO4 measured at 20 jC. The pair when the temperature was elevated, determined the cell of peaks, consisting of an anodic and a cathodic peak, capacity. By contrast, the voltage difference between observed around 3.4 V vs. Li/Li+ corresponded to the the charge and discharge curves in the plateau region two-phase charge – discharge reaction of the Fe2+ / changed little as the temperature increased. This volt- Fe3+redox couple. We supposed that the cathodic peak age difference related to the voltage drop caused by seen around 0.7 V vs. Li/Li+represented the reduction solution resistance. Therefore, a change in the solution of Fe2+to Fe0. This voltammogram indicated that onlyone electrochemical reaction, corresponding to thepeak pair shown around 3.4 V vs. Li/Li + , occurred Fig. 2. The effect of the discharge current on the cell dischargecapacity measured at 20, 40 and 60 jC after 10 charge – discharge Fig. 3. A cyclic voltammogram of LiFePO4 measured at 20 jC and 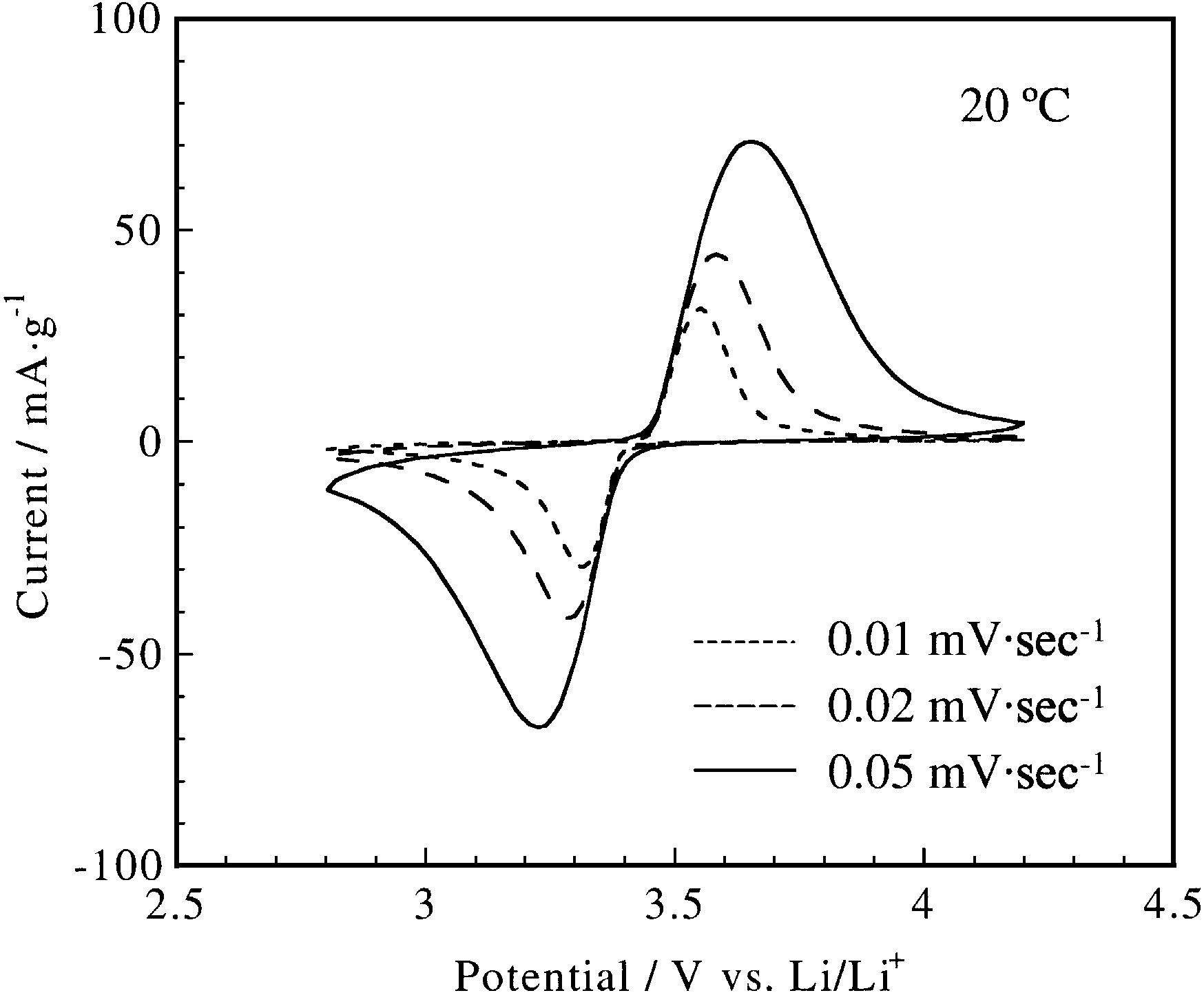 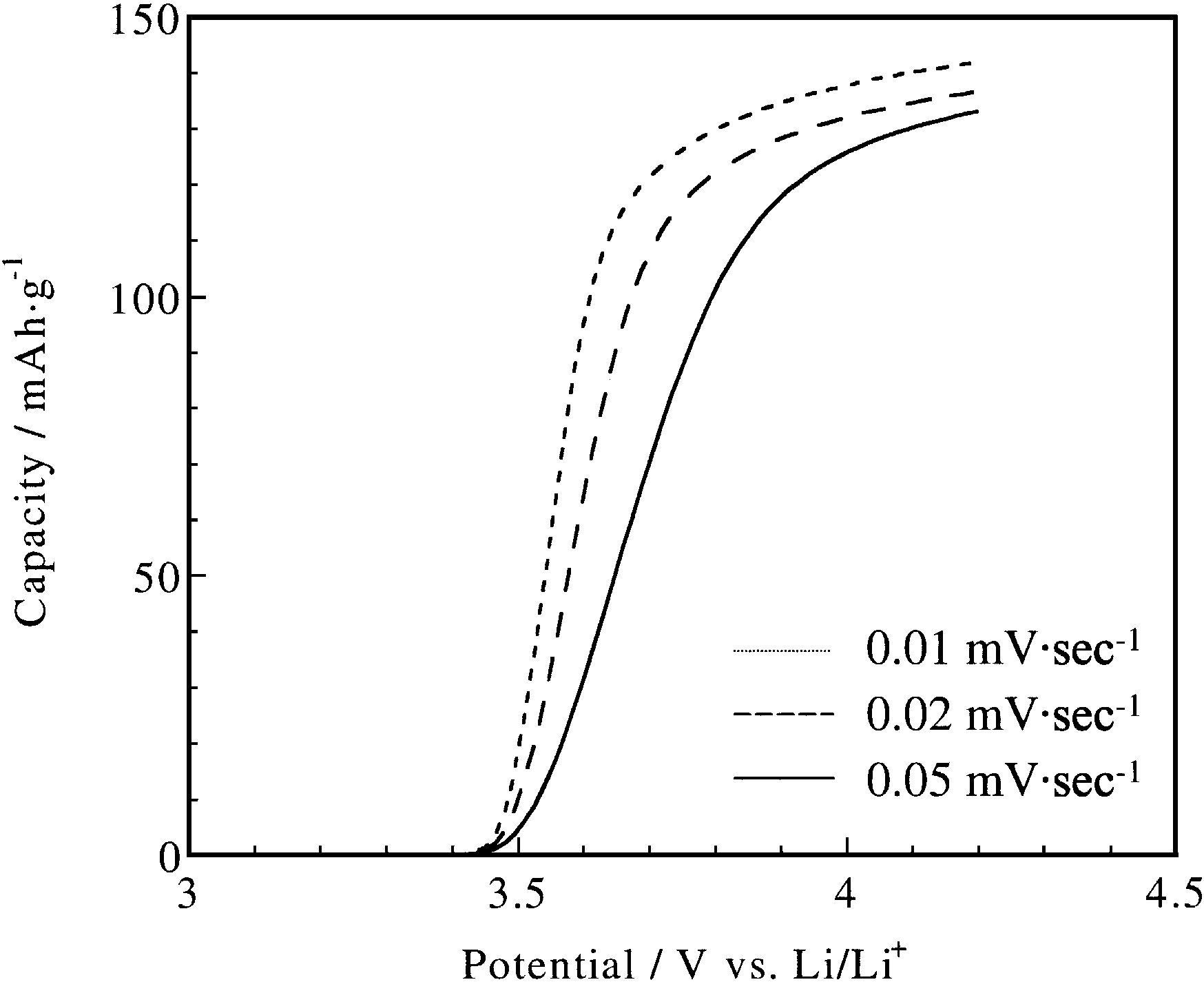 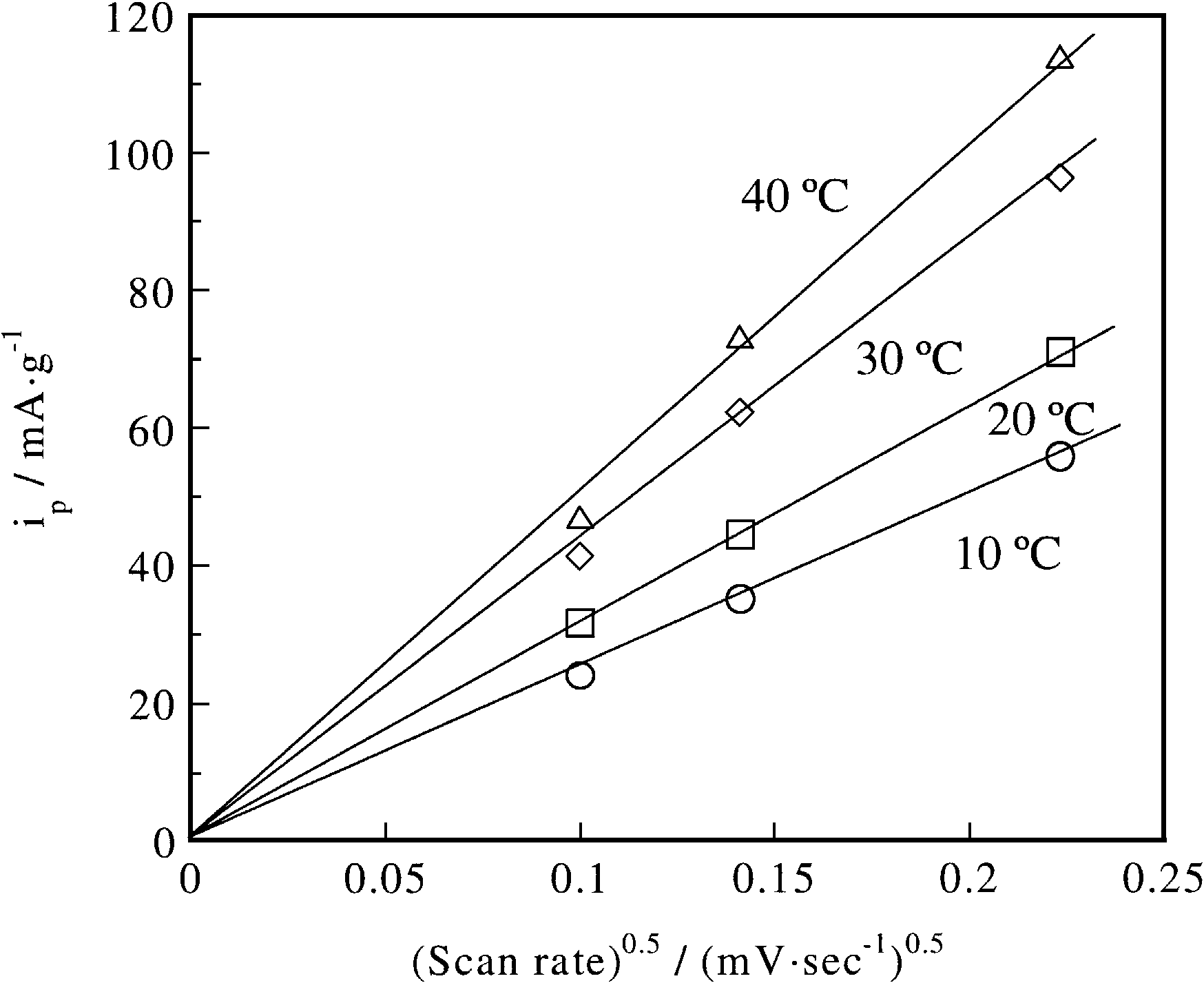 M. Takahashi et al. / Solid State Ionics 148 (2002) 283–289 during the charge and discharge of the LiFePO4. Fig. 4shows the effect of the potential scanning rate on thecycle voltammograms measured at 0.01, 0.02 and 0.05mVÁsÀ1. Although the wave shape of the anodic andcathodic peak was almost symmetrical, the potentialseparation between the two peaks increased as thescanning rate increased. Since the potential separationbetween the two peaks is independent of scan rate for anernstian (reversible) system [15], this result meansthat the Fe2+ /Fe3+ redox reaction is a quasi-nernstian(quasi-reversible) system. Fig. 5 shows relationshipbetween the potential and the electricity with which theelectrode was charged during the first anodic potentialscanning. The electricity was calculated by integratingthe anodic current observed in the first anodic scan forthe voltammetry with the time from the moment the Fig. 5. The relationship between the potential and the electricity potential scanning was started to the time the scanning calculated by integrating the anodic current observed in the first reached the potential. The total electricity during the anodic scan of the voltammetry from the initial to the potential.
first anodic scanning was about 135 mA hÁgÀ1, andthis corresponds to 80% of the theoretical capacity.
This means that the bulk of the LiFePO ature. If the absorbed species or only the materials at reacted during the measurement of the anodic voltam- the surface of the LiFePO4 particles contribute to the mogram peak. Fig. 6 shows the relationship between reaction, the peak current should be proportional to the the peak current and the square root of the scan rate, scan rate. Therefore, this means that the anodic peak of v0.5, for the anodic peak observe around 3. 4 V vs. Li/ the voltammogram at 3.6 V vs. Li/Li+ is related to the reaction of the diffusing species. We used the relation- The peak current is proportional to v0.5 and extrapo- ship between ip and v0.5 to estimate the diffusion lated to its origin regardless of the measured temper- coefficient of the lithium ions in the cathode materials Fig. 6. The relationship between the anodic peak current of the Fig. 4. The effect of the potential scan rate on the cyclic cyclic voltammogram and the square root of the scan rate, v0.5, voltammograms at 10, 20 and 50 AV sÀ1 and at 20 jC. 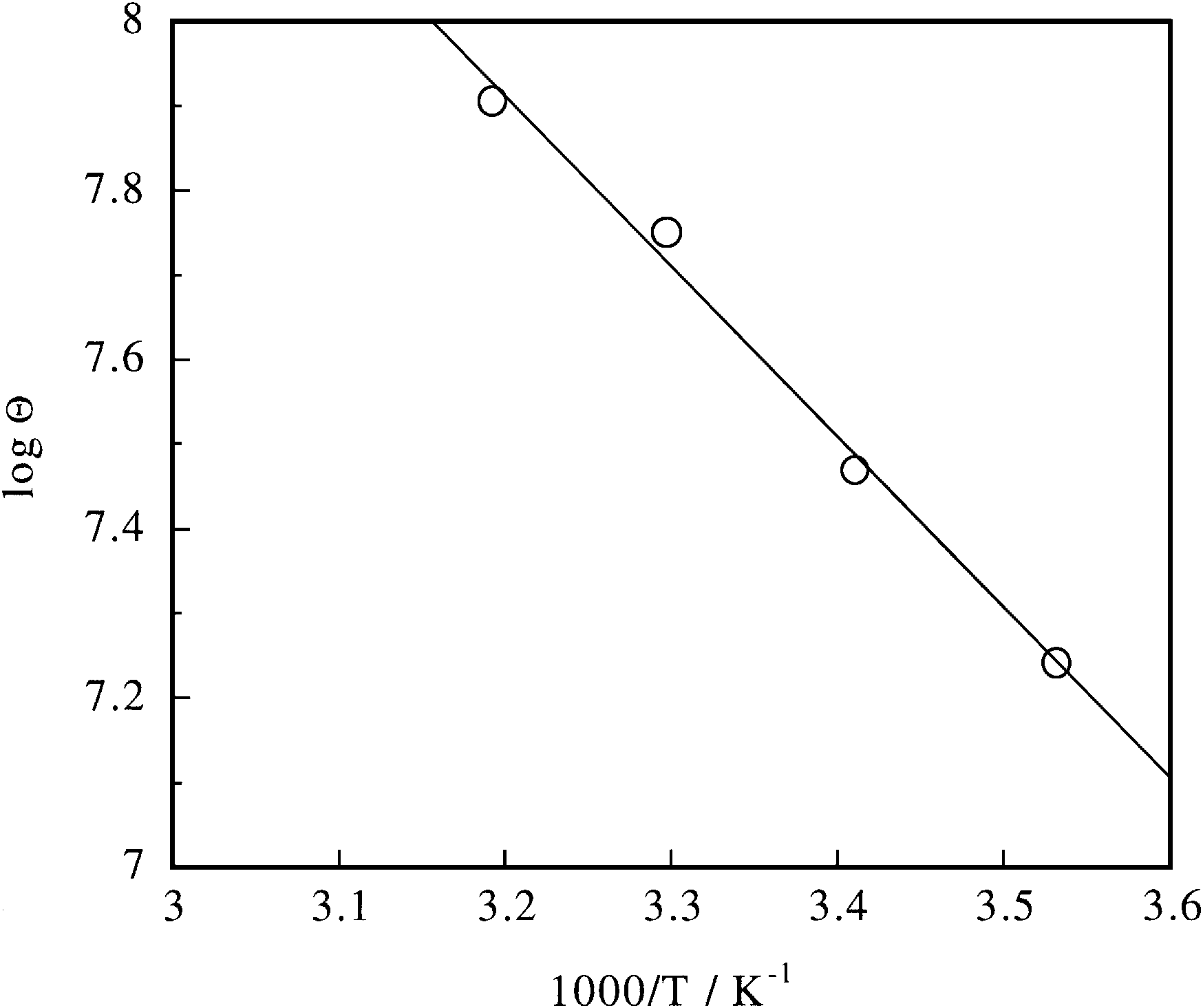 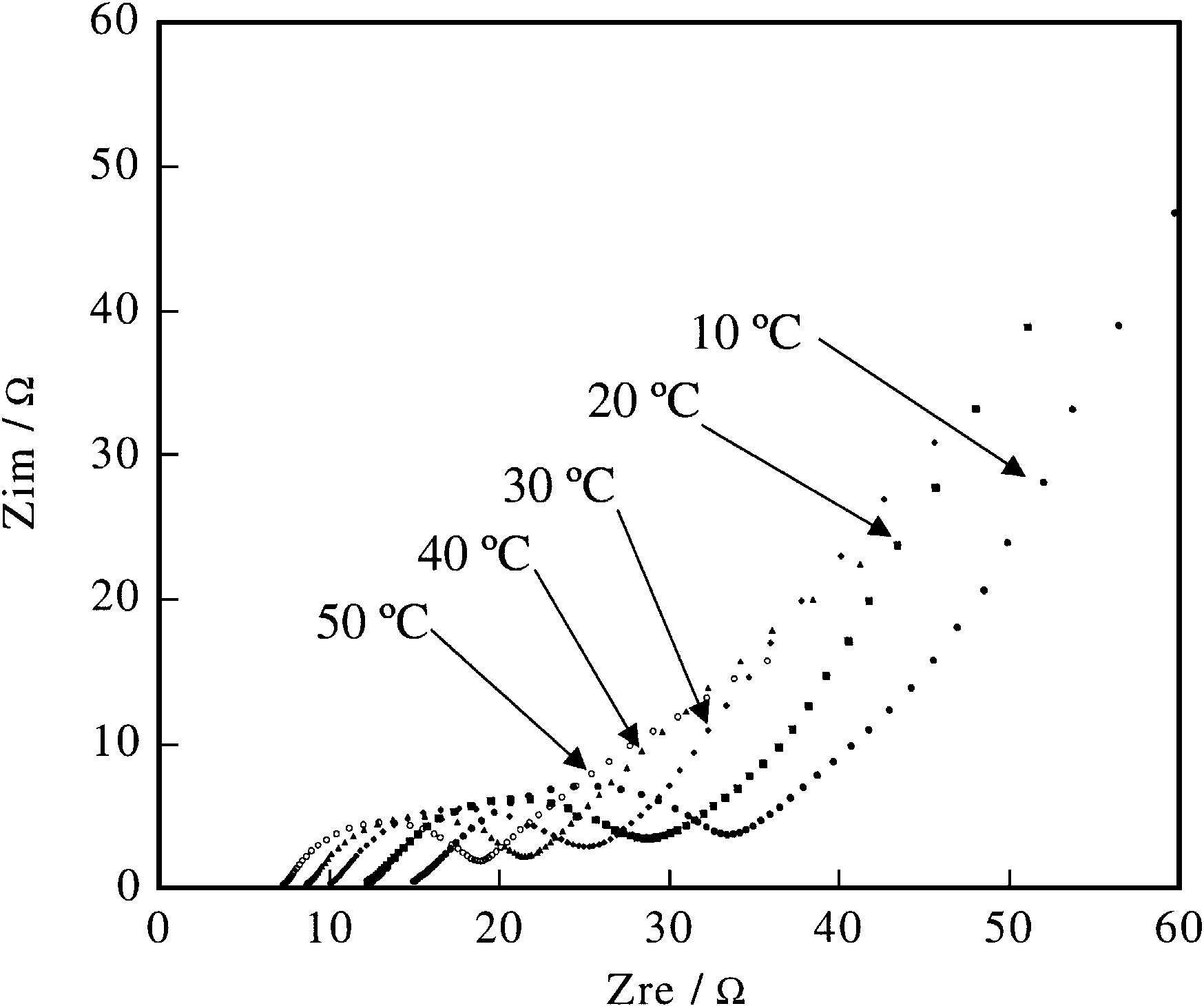 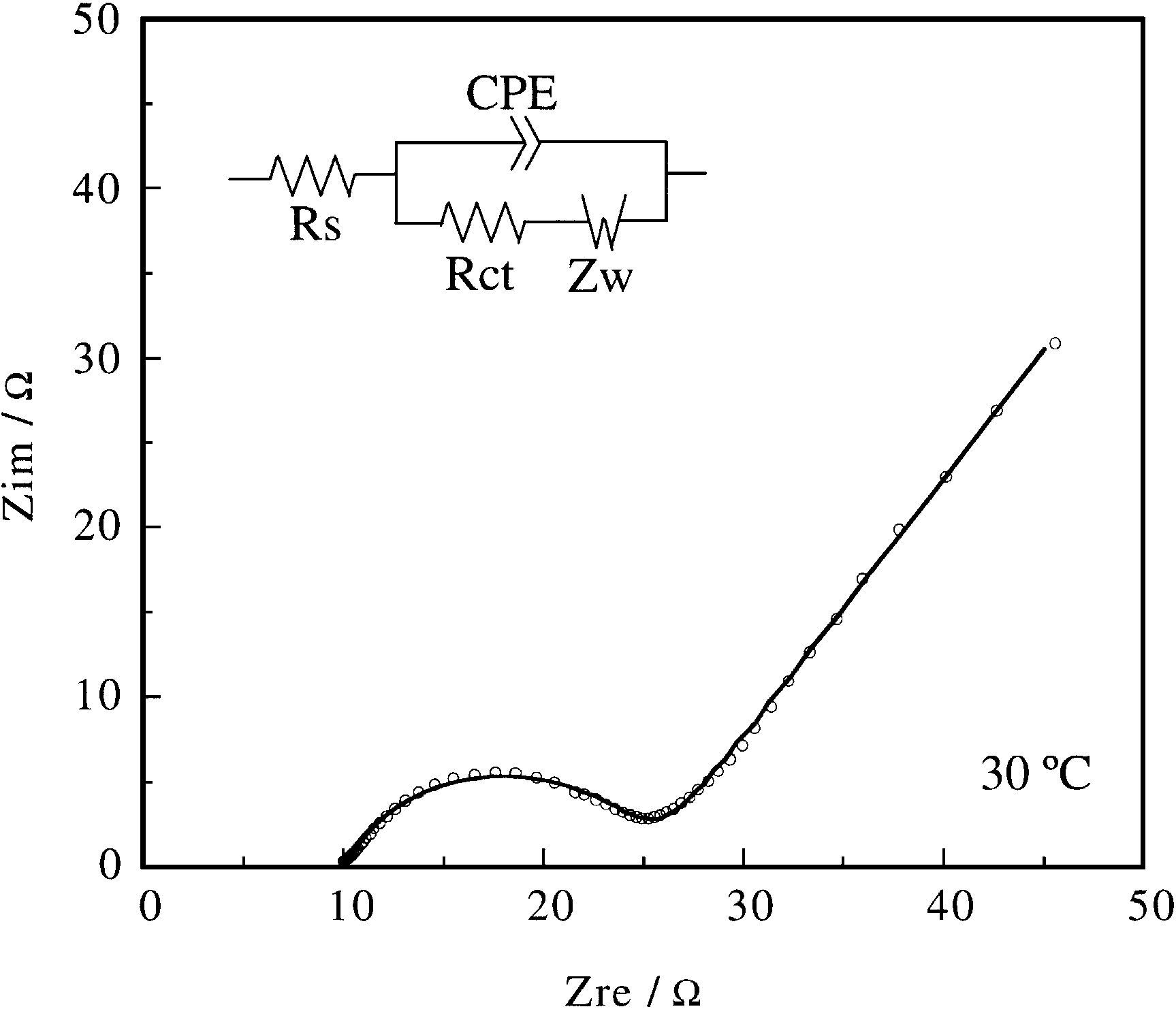 M. Takahashi et al. / Solid State Ionics 148 (2002) 283–289 Fig. 7. An Arrhenius plot of the square of the inclination angle of Fig. 8. The influence of the cell temperature on the Nyquist plot of the extrapolated line shown in Fig. 6.
LiFePO4, measured at 10, 20, 30, 40 and 50 jC.
[16 – 18]. For a quasi-reversible reaction, the peak The H value defined by the equation (3) is propor- tional to the D. The Arrhenius plot of H is shown in Fig. 7. Good linearity was observed and the apparent activation energy of the lithium diffusion was calcu-lated to be 39 kJ molÀ1 from the slope of the plot.
where n is electrons per molecule oxidized, F is the We also investigated the influence of the cell tem- Faraday constant, A is the surface area, C is the perature on the charge transfer of the LiFePO4 redox concentration, R is the gas constant, T is temperature, reaction with the EIS. Fig. 8 shows the influence of the D is the diffusion coefficient of lithium ions and cell temperature on the Nyquist plot of LiFePO4. The K(K,a) indicates the degree of irreversibility [15].
Ordinarily, K(K,a) is dependent on the v, and ip isnot proportional to v0.5 for a quasi-reversible reaction.
However, the ip values were completely proportionalto v0.5 as shown in Fig. 6. We assume that K(K,a) canbe treated as a constant in our scan rate measurementrange because the scan rate was relatively low and therate range was narrow. The inclination angle of theextrapolated lines h shown in Fig. 6 is representedfrom Eq. (1) as: Fig. 9. A comparison of the measured Nyquist plot and thecalculated values (shown by the line) with the equivalent circuit 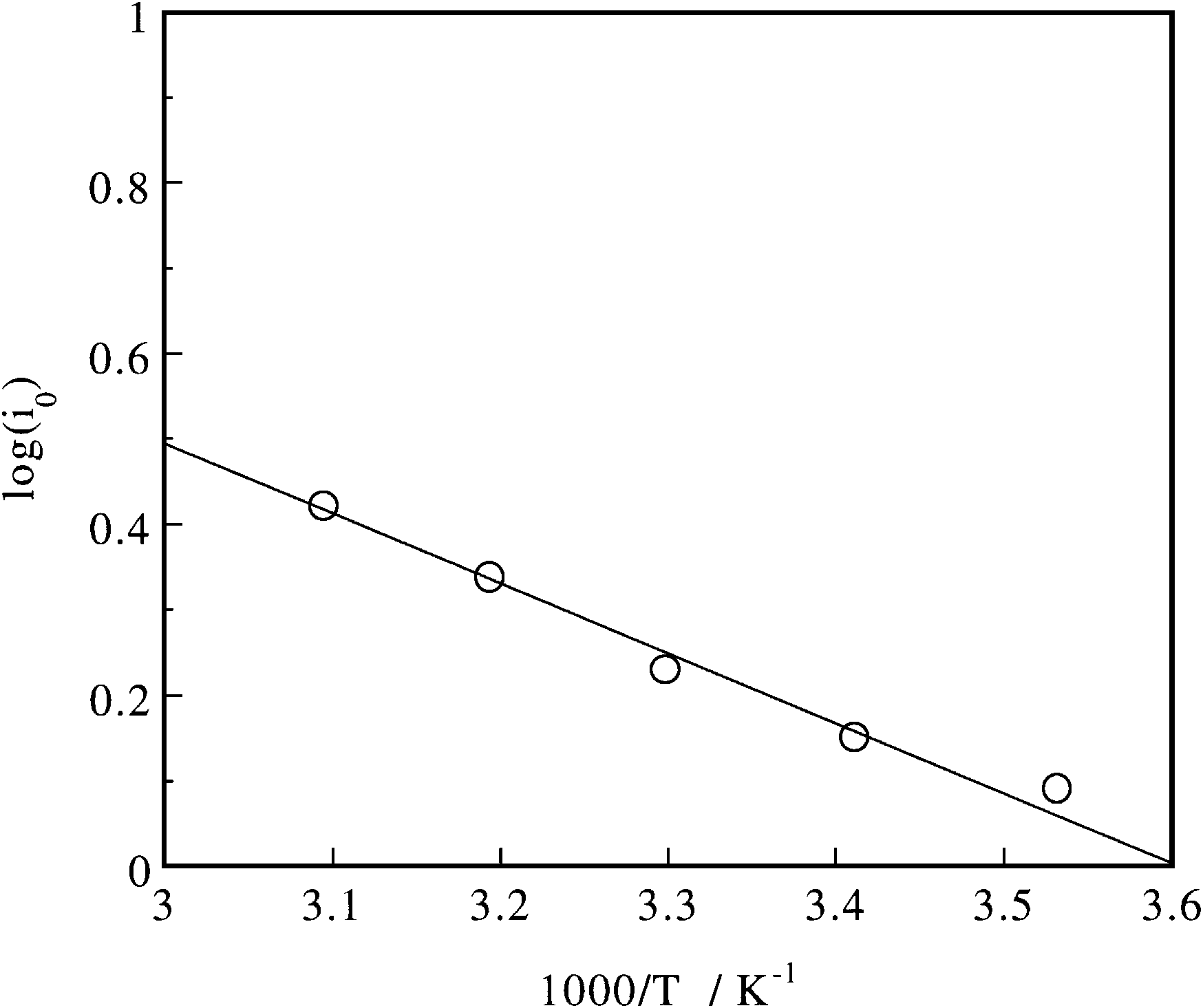 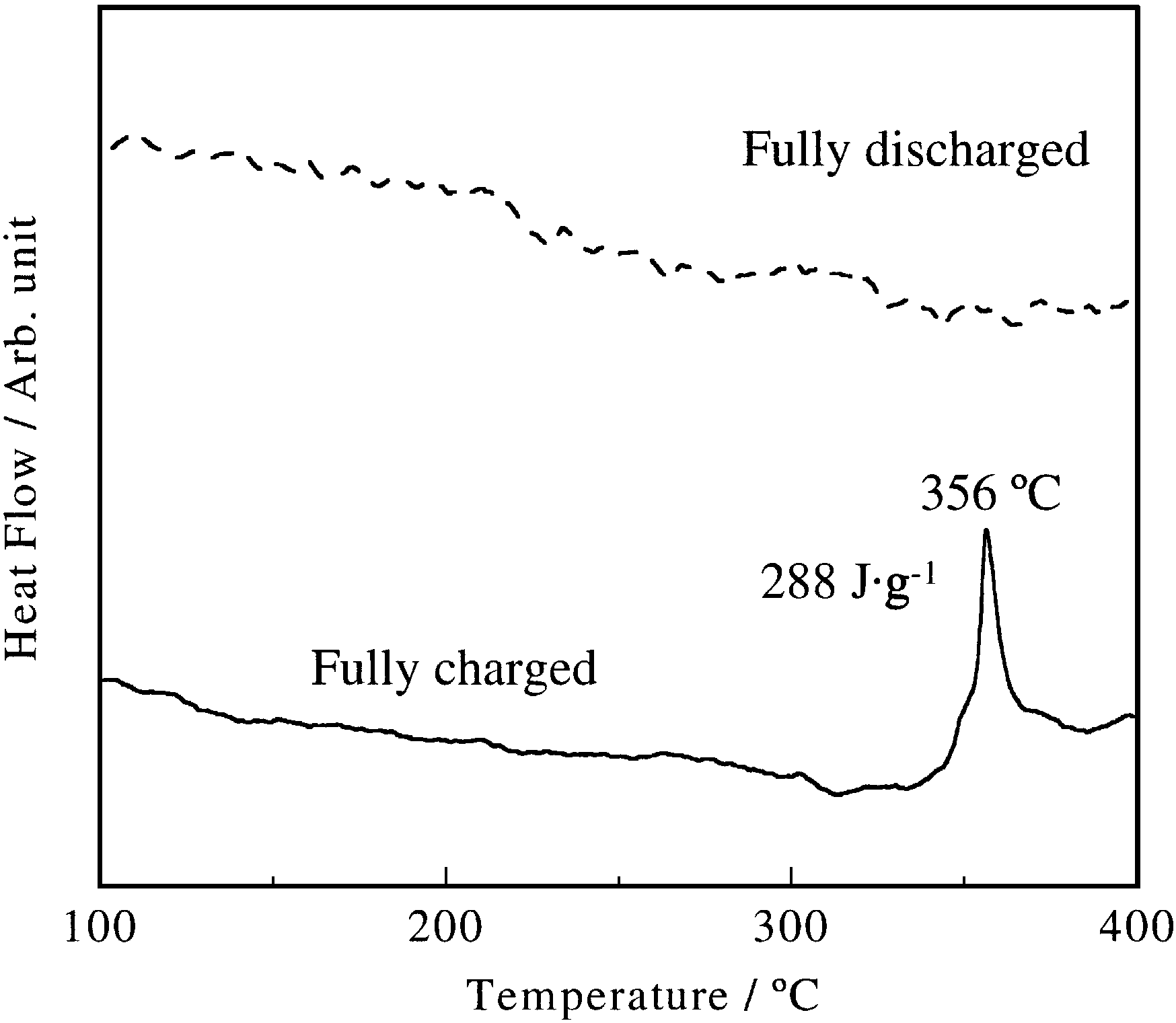 M. Takahashi et al. / Solid State Ionics 148 (2002) 283–289 than half that for the lithium diffusion obtained from theplot shown in Fig. 7. This result indicates that theinfluence of the cell temperature on the lithium diffusionprocess is larger than that of the charge transfer for thelithium extraction reaction of the LiFePO4 electrode. Weconfirmed that the effect of the cell temperature on thecell capacity and the current dependence of the capacityresults mainly from the enhancement of the lithiumdiffusion at elevated temperatures.
The thermal stability of the charged and discharged states of the LiFePO4 in contact with the electrolytesolution is shown in the DSC curves of Fig. 11. Forthe fully charged state, we observed a small exother-mic peak at about 360 jC. This temperature is higherthan that reported by Yamada et al. [14]. The total heatflow value of 288 JÁgÀ1 is about twice the value they Fig. 10. An Arrhenius plot of i0 obtained from the Nyquist plots reported. The difference in the electrolyte composition may affect the decomposition temperature and theheat flow. For the discharged state, there was no high-frequency limit shifted in the negative direction obvious heat evolution up to 400 jC. Discharging on the real axis as the temperature increased. This caused the exothermic peak observed for the charged means that the ohmic resistance, mainly the solution sample to disappear. The DSC results indicate that the resistance of the electrolyte, decreased with increasing thermal stability of LiFePO4 is much better than that the cell temperature. All plots exhibit a depressed of other cathode materials such as LiNiO2, LiCoO2 semicircle in the high frequency region, which is attributed to the charge-transfer process. We fitted theseimpedance data with the equivalent circuit shown in theinset of Fig. 9 to estimate the charge transfer resistanceRct. As shown in Fig. 9, the calculated values fit well tothe measured values. This equivalent circuit was ob-tained by substituting the double layer capacitance ofthe Randles equivalent circuit [19] to the constantphase angle element (CPE). The CPE is commonlyused to describe the depressed semicircle that resultsfrom a porous electrode [20 – 22]. The exchange currenti0 was obtained from Rct by using equation [15]: Although we have no means of comparing the absolutevalue of i0 with those of other materials because we didnot obtain the surface area of the LiFePO4 electrode, weare able to evaluate the temperature dependence of i0 byusing these values. The Arrhenius plot of i0 is shown inFig. 10. Good linearity was also observed. The appa- Fig. 11. The DSC curves of the charged and discharged states after rent activation energy of the charge transfer calculated charging the LiFePO4 in contact with the electrolyte solution in a from the angle of the plot is 15 kJ molÀ1. This value is less M. Takahashi et al. / Solid State Ionics 148 (2002) 283–289 [4] A.K. Padhi, K.S. Nanjundaswamy, J.B. Goodenough, J. Elec- [5] A.K. Padhi, K.S. Nanjundaswamy, C. Masquelier, S. Okada, The cell temperature affected both the charge and J.B. Goodenough, J. Electrochem. Soc. 144 (1997) 1609.
discharge capacity of the LiFePO4 electrode and the [6] A.K. Padhi, K.S. Nanjundaswamy, C. Masquelier, J.B. Good- current dependence of the capacity. We examined the enough, J. Electrochem. Soc. 144 (1997) 2581.
effect of temperature on the activity of the lithium [7] C. Masquelier, A.K. Padhi, K.S. Nanjundaswamy, J.B. Good- diffusion process and charge transfer process in the enough, J. Solid State Chem. 135 (1998) 228.
[8] A.K. Padhi, V. Manivannan, J.B. Goodenough, J. Electro- LiFePO4 redox reaction. The lithium diffusion process was more affected by temperature than the electron [9] N. Ravet, J.B. Goodenough, S. Besner, M. Simoneau, P. Hov- transfer process. We confirmed that the increase in the ington, M. Armand, Abstract No. 127, The 1999 Joint Interna- tional Meeting, Hawaii, Oct. 17 – 22.
4 capacity as the cell temperature rose was caused mainly by the increasing lithium diffusion rate.
[10] M. Takahashi, S. Tobishima, K. Takei, Y. Sakurai, Abstract of 10th International Meeting on Lithium Batteries, No. 181, DSC measurement revealed no obvious heat evo- lution for the charged LiFePO4 with the electrolyte [11] M. Takahashi, S. Tobishima, K. Takei, Y. Sakurai, J. Power solution below 340 jC. We concluded that the thermal [12] A.S. Andersson, J.O. Thomas, B. Kalska, L. Ha¨ggstro¨m, Elec- trochem. Solid-State Lett. 3 (2000) 66.
[13] A.S. Andersson, B. Kalska, L. Ha¨ggstro¨m, J.O. Thomas, Solid [14] A. Yamada, S.C. Chung, K. Hinokuma, J. Electrochem. Soc.
[15] A.J. Bard, L.R. Faulkner, Electrochemical Methods, Wiley, [16] H. Kanoh, Q. Feng, Y. Miyai, K. Ooi, J. Electrochem. Soc.
The authors wish to express their gratitude to Dr.
K. Komatsu for his encouragement during the course [17] Y. Xia, H. Takeshige, H. Noguchi, M. Yoshio, J. Power Sour- of this study. The authors also wish to thank Ms. N.
[18] D. Zhang, B.N. Popov, R.E. White, J. Electrochem. Soc. 147 [19] Southampton Electrochemistry Group, Instrumental Methods in Electrochemistry, Wiley, New York, 1985, p. 267.
[20] J.R. Macdonald, Solid State Ionics 13 (1984) 147.
[21] S.R. Narayanan, D.H. Shen, S. Surampudi, A.I. Attia, G. Hal- [1] M. Winter, J.O. Besenhard, M.E. Spahr, P. Nova`k, Adv. Mater.
pert, J. Electrochem. Soc. 140 (1993) 1854.
[22] A. Funabiki, M. Inaba, Z. Ogumi, S. Yuasa, J. Otsuji, A.
[2] A. Manthiram, J.B. Goodenough, J. Power Sources 26 (1989) Tasaka, J. Electrochem. Soc. 145 (1998) 172.
[23] J.R. Dahn, E.W. Fuller, M. Obrovac, U. von Sacken, Solid [3] K.S. Nanjundaswamy, A.K. Padhi, J.B. Goodenough, S. Oka- da, H. Ohtsuka, H. Arai, J. Yamaki, Solid State Ionics 92(1996) 1.