Simultaneous Multi-Vintage 4D Binning
Ehsan Zabihi Naeini*1, Henning Hoeber1, Ben King1, Dimitry Rumyantsev1 and 1CGGVeritas, *University of Tehran, 2Statoil Hydro Abstract
4D binning is an important processing step to improve the repeatability of time-lapse (4D)
data. Binning is a strategy for selecting those traces which are most similar between the time-
lapse vintages. With two vintages of 4D seismic data the trace similarity is easily obtained,
for example, as the difference of the source and the receiver position of the corresponding
traces. With more than two vintages, a “cascaded” approach has generally been used, whereby
the vintages are binned pair-wise as in the two-vintage case, with each new vintage being
binned relative to the previous ones. This does not necessarily yield an optimum solution for
multi-vintage datasets and leaves open the debate about which vintage to pick as the
reference. In this paper we introduce a simultaneous multi-vintage (SMV) 4D binning
algorithm which obtains the best possible repeatability across all vintages and in each bin. We
compare SMV 4D binning to cascaded 4D binning on a multi-vintage North Sea survey.

Introduction
Time-lapse seismic has proven to be a successful technology for monitoring reservoirs, so
much so, that many surveys in the North Sea have by now been repeated multiple times. This
poses extra challenges for seismic data analysis, but also offers some new opportunities for
optimizing certain processes. In this paper we propose a multi-dimensional 4D binning
algorithm which extends 4D binning between two vintages to multiple repeated datasets. This
algorithm replaces a multi-vintage 4D workflow in which vintages are binned in a cascaded
fashion (one by one), in which each vintage is only ever compared to those already binned.
We call this traditional workflow the “cascaded” approach. By contrast, the proposed multi-
vintage algorithm calculates a repeatability cost-function between all vintages simultaneously.
We call this “simultaneous multi-vintage binning”, or SMV binning for short. SMV binning
allows us to find a better overall repeatability between the multiple vintages than a cascade.
We explain the advantages of SMV using a simple synthetic example and show a case study
from the North Sea with 4 vintages.
4D Binning (2 vintages)
The concept of binning is familiar to us from 3D processing. When a multi-fold 3D seismic
survey is acquired the area of a 3D survey is divided into bins and traces are assigned to
specific bins according to the midpoint between the source and the receiver. It is of course
possible that more than one trace falls into one bin for a particular offset class either due to
overlapping swathes or infill shooting. In practice, one trace will be chosen in order to have a
uniform fold pattern and to minimize the acquisition related artefacts at the imaging stage.
In a 4D setting, minimizing these artefacts for each 3D seismic section independently does not necessarily lead to their automatic cancellation on the 4D difference section. For example 3D migration noise from base and monitor will not cancel out on 4D subtraction if the acquisition positioning is not well repeated (Poole and Lecerf, 2006). The purpose of 4D binning (with two vintages) is therefore to find, for each bin and each offset class, the most repeatable pair of traces between the base and monitor volumes. In other words, we are prepared to sacrifice some of the 3D image quality in order to achieve better subtraction between vintages (Meunier and Herculin, 2003). This 4D strategy sometimes goes under the name of “repeating the errors”. In practice this can be done with acquisition attributes such as source and receiver distances as well as with seismic attributes such as correlation, NRMS or predictability. More complex cost functions can be built from these attributes using 71st EAGE Conference & Exhibition — Amsterdam, The Netherlands, 8 - 11 June 2009 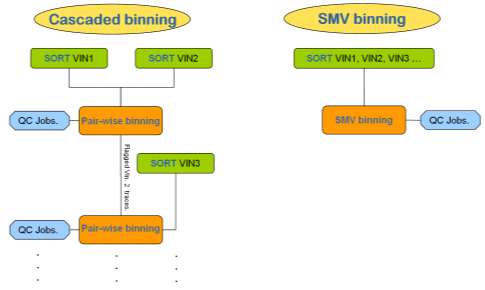 combinations and cascaded selections (for example: choose all trace-pairs within a fixed source-receiver distance and then pick the best pair from these using an NRMS criterion). For the North Sea results presented below, we use the difference of the source and receiver positions between the base and monitor traces as our 4D binning attribute. Multi-vintage 4D Binning
Key concerns we need to address when moving from two to more vintages are the
acceptability of the algorithms used with regards to a) finding the best overall repeatability
between all acquired surveys b) uniqueness and c) turnaround. SMV improves on cascaded
multi-vintage binning with regards to all of these aspects.
Figure 1 shows a schematic diagram of cascaded pair-wise 4D binning with multiple vintages. The cascaded approach with more than two vintages can be summarized as: 1. Decide which vintage to treat as the reference. 2. Perform 4D binning between the chosen reference and the first monitor surveys, thus fixing the trace selection in the reference (and the first monitor). 3. Perform 4D binning between the chosen reference and all other monitor surveys An example of this approach can be found in Hoeber et al. (2005) where the cascaded flow was used for 4D binning of 3 vintages. The cascaded approach clearly requires an upfront decision of which dataset to use as the reference, followed by repeated re-application of the pair-wise binning. At the same time, cascaded binning does not necessarily give the best repeatability across all vintages, particularly not for all bins simultaneously. Consider, for example, a (synthetic) scenario with
Figure 1. “Cascaded 4D binning” flow using pair-wise binning (left) compared to simultaneous multi-vintage 4D
binning (“SMV binning”). Green boxes represent the input, orange boxes represent the process and blue boxes are
QC jobs
three vintages. Suppose we are considering a bin in which each vintage has 2 traces per bin as
shown in figure 2. In the first box (labelled “Input”) we calculate all possible repeatability
values (here we use NRMS as an example, but any other criterion can be used) between all
pairs of traces across all vintages. The two boxes below show two possible outcomes of
cascaded binning which differ in the choice of the reference and the first monitor. In order to
assess the quality of the final repeatability of the process we define a multi-dimensional
repeatability attribute as the Euclidean distance between all vintages:
71st EAGE Conference & Exhibition — Amsterdam, The Netherlands, 8 - 11 June 2009

where NRMSi is the NRMS value between a specific pair of vintages and NCOMB is the total number of vintage pair combinations. This is calculated as 1.12 and 0.75 for the two proposed cascades (corresponding to the ordering (1,2,3) and (3,2,1) of the vintages in the cascade). We see that the outcome of the cascaded binning depends crucially on the choice of the reference survey. In the cascaded approach the first application of pair-wise binning always yields the best solution for the first two vintages but results in a limited choice for the trace selection of subsequent repeat surveys. This leaves the processor with the difficult upfront decision as to how to order the cascade. Testing of this ordering can also be time-consuming. It is equally evident that the optimal ordering can vary from bin to bin. Simultaneous multi-vintage binning solves these problems of the cascaded binning solution. In order to find the best overall global repeatability in each bin, we define a multi-vintage cost function for the binning process similar to equation (1) and minimize it in each bin: where Att is shorthand for the chosen binning attribute. In each bin this cost function is evaluated for all possible trace combinations and the trace from each vintage corresponding to its minimum is retained. Of course, in each bin, the minimum thus found corresponds to a particular choice of ordering of the potentially possible cascaded solutions. For example, in the example in figure 2, the overall minimum of the cost function can also be obtained by cascaded binning starting with vintages one and three (this is the cascaded-binning solution 3). It is thus clear, that the proposed algorithm can also be interpreted as a method of finding the best ordering of the cascaded solution but on a bin-by-bin basis. The algorithm removes the need for testing of how best to cascade the pair-wise binning and therefore has a positive impact on turnaround of multi-vintage 4D projects. 71st EAGE Conference & Exhibition — Amsterdam, The Netherlands, 8 - 11 June 2009 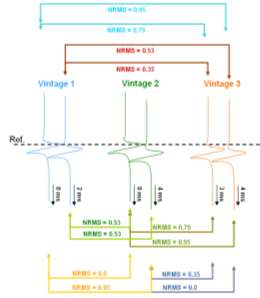 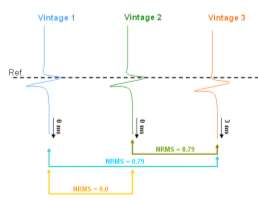 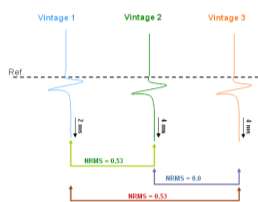 Figure 2.
Top: A 3 vintage synthetic where each vintage
on input has 2 traces per bin.
Middle: Two possible outcomes of the cascaded
binning approach using the pair-wise binning
algorithm where the first pass of binning uses
the vintages circled by the ellipse.
Bottom:
binning solution. The minimum global NRMS, which is a measure of global repeatability, is automatically obtained by SMV binning. 71st EAGE Conference & Exhibition — Amsterdam, The Netherlands, 8 - 11 June 2009 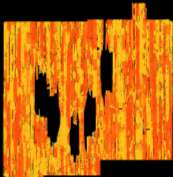 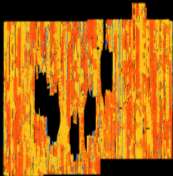 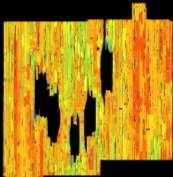 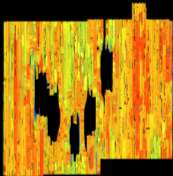 North Sea Application
Figure 3 compares cascaded pair-wise and SMV binning on a North Sea data example with 4
vintages. The input to this test is a near offset class volume and the binning criterion is the
difference in source and the receiver position of the base and monitor surveys (ΔSRCREC).
Figure 3. ΔSRCREC maps of two of
1996-1999 cascaded binning
2003-2005 cascaded binning
Cascaded binning achieves better results for 1996-1999 which is the first pair to be binned in the cascade without taking into account the other vintages. However for all other combinations SMV binning achieves the better results (only one example, 2003-2005, is shown here). By design SMV also finds the best overall repeatability as defined in the cost function in eq. 2 (see figure 4). Cascaded binning
average=45 meters
1996-1999 SMV binning
2003-2005 SMV binning
SMV binning
ge=40 meters
Figure 4. ΔSRCREC histogram
of all the combinations. SMV
binning finds the best global
For simplicity we show only two of the six different map combinations. We observe that for 1996-1999 combination the SMV binning results are slightly degraded in comparison with the pair-wise binning. Locally, the pair-wise binning here finds a better solution. On the other hand, there is a significant improvement for SMV binning on the 2003-2005 combination where all the blue stripes (indicating large ΔSRCREC) are removed. The improvement between these two vintages more than makes up for the small reduction on 1996-1999. Figure 4 compares the histogram of ΔSRCREC calculated across all the available vintage combinations: By design SMV binning finds the best global repeatability (as defined in equation 2) across all vintages and for each bin. Conclusion
We showed that pair-wise cascaded 4D binning does not result in optimum overall
repeatability for all vintages leaving unnecessary artefacts in the seismic data. We introduced
a simultaneous multi-vintage binning algorithm that finds the best global repeatability across
all vintages and showed how this helps to reduce acquisition related artefacts.
71st EAGE Conference & Exhibition — Amsterdam, The Netherlands, 8 - 11 June 2009
Acknowledgments
The authors thank CGGVeritas for permission to publish this work and Statoil Hydro for
permission to show the data example.
References
Hoeber, H et al., 2005, Improved 4D Seismic Processing: Foinaven Case Study, 75th SEG
annual meeting, Expanded Abstract, 2414-2418. Meunier, J. and Herculin, S., 2003, Evaluation and handling of positioning differences in 4D seismic, 73rd SEG annual meeting, Expanded Abstract, 75-78. Poole, G., and Lecerf, D., 2006, Effect of regularization in the migration of time-lapse data, 71st EAGE Conference & Exhibition — Amsterdam, The Netherlands, 8 - 11 June 2009