11-105 estimate of veterinary antibiotic usage in nl in 2011; based on preliminary results of the first half year

Estimate of veterinary antibiotic usage in NL in 2011
based on preliminary results of the first half year
Published on MARAN website18 November 2011
This is a publication of LEI, part of Wageningen UR.
The information presented on the MARAN website is a collation of data from on-going surveillance systems
on the sales and use of antimicrobial agents in animal husbandry in the Netherlands. The website also
provides more detailed data about the usage of antibiotics.
LEI project team
Nico Bondt (project leader), Linda Puister, Hennie van der Veen, Ron Bergevoet, Bernard Douma,
Arno van Vliet and Klaus Wehling
LEI, part of Wageningen UR
The Hague
The Netherlands
Acknowledgements
This study was primarily financed by the Ministry of Economic Affairs, Agriculture and Innovation, through
the LEI monitoring projects 2273000324 and 2273000340.
The project team thanks the following persons:
­ Dr. I.M. van Geijlswijk from the University of Utrecht, for providing the data about the dosage of
antimicrobial agents in the various animal species. ­ Drs J.F. Schutte and Drs B.G.M. Eussen from the FIDIN for providing the national sales data. ­ the members of the Taskforce Masterplan Rational Use of Antibiotics in the Veal Calf Sector for their contribution to the antibiotic usage surveillance in veal calves. ­ the veterinarians and farmers who have provided data of usage. Results In the first semester of 2011 (1-1-2011 to 1-7-2011) the total sales of antibiotics in the veterinary sector were 32% below the level of the same period in 2009. Preliminary data of sample farms about the antibiotic use in the first half year of 2011 also indicate a decrease in antibiotic use in all five animal production sectors examined in 2011. Trends in total sales Sales data reveal that in the first half year of 2011, the total amount of antibiotics sold by the pharmaceutical industry (FIDIN members) in the Netherlands for therapeutic veterinary use, was 32,1% below the level for the same period in 2009 (Table 1). Tetracyclines showed the largest decrease (-42%), penicillins/cephalosporins the smallest (-8%). Total sales of veterinary antibiotics in the Netherlands in the first half year
of 2011 compared to the first half year of 2009 (kg active substance)
Tetracyclines The sales data indicate a total decrease of 41.6% for tetracyclines. The underlying detailed data show a stronger decrease of doxycyclines (-45%) than of oxytetracyclines (-40%). Quinolones In the first half year of 2011 the quinolones represented 1.62% of the total veterinary antibiotic sales in the Netherlands, of which 0.40% ‘newer’ fluoroquinolones (danofloxacin, difloxacin, enrofloxacin and marbofloxacin). In 2011-I compared to 2009-I the sales of quinolones decreased by 26.8%. The sales of the newer fluoroquinolones showed a slight increase of 2%. Cephalosporins In the first half year of 2011 the cephalosporins represented 0.22% of the total sales, of which 0.18% third and fourth generation cephalosporins (cefoperazon, cefovecin, cefquinome, ceftiofur, cefuroxim). In 2011-I compared to 2009-I the sales of third and fourth generation cephalosporins decreased substantial y, by 32%. Tendencies in exposure As shown in Figure 1 sample surveys reveal the following tendencies for the years 2005 to the first half year of 2011, indicating a further decrease in antibiotic use in all five studied animal production sectors in the Netherlands in 2011, when extrapolated to annual usage: ­ sow/piglet farms: annual variation until 2009, decrease in 2010 and 2011; ­ fattening pig farms: increase until 2008, decrease in 2009-2011; 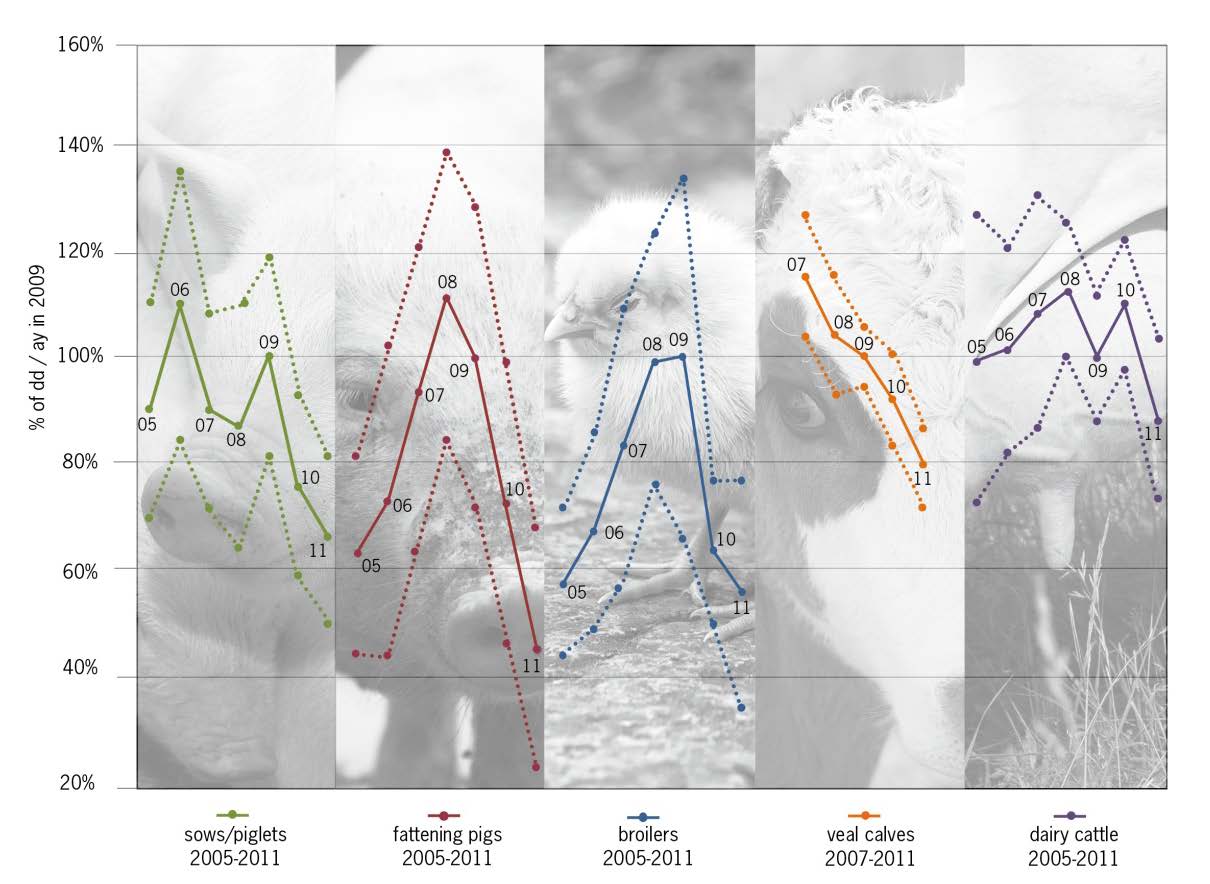 ­ broiler farms: increase until 2009, decrease in 2010 and 2011; ­ veal calf farms: decrease from 2007 to 2011; ­ dairy farms: annual variation until 2010, decrease in 2011. Note that the exposure in 2011 is an estimate based on preliminary data of the first half year. The final figures about the antibiotic usage in the whole year 2011 may differ from this first estimate, because of the following factors: ­ analysis of more sample farms: the estimate is based on approximately 80% of the sample farms; ­ structural seasonal effects: there might be seasonal differences in usage due to different weather conditions in winter, spring and early summer compared to autumn and early winter; ­ incidents: antibiotic usage will be lower in case of no outbreaks of diseases or extreme beneficial ­ normal stocks of veterinary medicines: the same stock has an higher impact on a half-year estimate Except for the first comment, the comments above also hold for the total sales data. Tendencies in antibiotic usage 2005-2011 (estimate)*
*results 2011 are estimated, based on preliminary results of the first half year The figure shows the tendencies in exposure to antibiotics in defined daily dosages per average animal present per year (ADD) in the five livestock sectors examined in this study. The outcome of the calculations is indexed, using 2009 as baseline year. The continuous line represents the estimated average use until 2010. The estimate based on usage in the first half year of 2011 is presented by the dotted line. The 95% confidence intervals are indicated by the lines with the small dots shown in Figure 1. The results are presented from 2005 to 2011, for veal calves as from 2007. LEI – Kennis van nu voor ontwikkeling van morgen Het LEI ontwikkelt voor overheden en bedrijfsleven sociaal-economische kennis op het gebied van voedsel, landbouw en groene en blauwe ruimte. Met onafhankelijk onderzoek biedt het zijn afnemers houvast voor maatschappelijk en strategisch verantwoorde beleidskeuzes. Meer informatie:

Improper storage of hazardous chemicals may result in degradation of chemical quality, deterioration of container labels, release of toxic gases, fire, or even explosion. As a result, local and state regulations require that chemicals be stored according to hazard class and compatibility. A significant amount of thought, planning, and research on the hazards associated with the chemicals being