Polyploidy in Sugar Beets Induced by the Use
of Colchicine, Ethyl Mercury Phosphate,
and Other Chemicals1
F R A N K F . L Y N E S A N D C . D . H A R R I S 2 Chemically induced polyploids, particularly those of economic plants, have attracted considerable attention during the past 4 years.
Colchicine has been widely used and is now generally accepted as a
standard chemical for this purpose. Other chemicals and treatments
have been investigated, but their application and use has not been as
general as the use of colchicine.
This paper presents the results of a detailed greenhouse experi- ment evaluating the use of colchicine for inducing polyploidy in sugar beets by the seed-soaking method. There are also included the results of numerous preliminary experiments involving the use of ethyl mer-cury phosphate, sulfanilamide, sulfapyridine, calcium phosphate, and X-ray treatments. Colchicine Seed-Soaking Treatments
Our attempts to produce polyploidy in sugar beets during the spring of 1938 by the use of colchicine as suggested by Blakeslee and Avery (3) were not very successful since all of the polyploids pro-duced either reverted to normal or died.3 The following experiment was conducted to evaluate the col- chicine seed-soaking procedure. Solutions of colchicine, of from 0 to 2.0 percent were utilized and 50 seedballs of a commercial variety of sugar-beet seed were soaked in each of these solutions for from 1 to 6 days at room temperature and then planted. Dry seed was also plant-ed as a check. The development of the seedlings was closely observed and counts were made on the number of plants produced. The number of poly- ploids present in each lot was determined by their thickened hypocotyl, and all diploids present were removed. Periodic microscopic examina- tions of the size of the stomata as suggested by Artschwager (2) were made and counts of the number of plants reverting and of the num- ber dying were maintained for 4 months. The results of this entire experiment are presented in figure 1. 1 Contributio n from th e Beet Seed Breedin g Department , Holly Suga r Corpora- 2Assoeiate Agronomis t and formerly J u n i o r Agronomist , respectively. Credit is due A. E. Artschwager, Division of Sugar P l a n t s , U.S.D.A., for suggestions in con-ducting these experiments and for cytological examinations of the polyploids induced by ethyl mercury phosphate. 3 Figure s in parenthese s refer to Literatur e Cited. In general, the data included in figure 1 show that, as the soak- ing time or the concentration was increased, the number of plants produced was decreased but the percentage of polyploids obtained was increased. The amount of reversion taking place was not great in most cases but the death rate rapidly increased with the number of polyploids produced, so that at the end of 4 months only a small portion of the induced polyploids remained from any one treatment. Miscellaneous Preliminary Experiments
Hormone Treatment of Colchicine Induced Polyploids.—It was
noticeable in the polyploids induced by soaking the seed in solutions of colchicine that root development was greatly retarded. Six groups of polyploids induced by this method were transplanted and the roots treated with commercial preparations of indolebutyric acid in an at-tempt to overcome the retarded root development. No apparent value resulted from these hormone treatments. X-Ray Seed Treatment.—Three X-ray exposures were made of
8 lots of beet seed ranging from 0 to 36 seconds. One hundred seed-balls were planted of each lot after each exposure, making a total of 24 lots containing X-ray exposures of 0 to 108 seconds. Good germination was obtained in every case. The development of the seed- lings was closely observed for the appearance of polyploids, but they appeared to be normal in every respect. Ethyl-Mercury-Phosphate Seed Treatment.—A series of experi-
ments indicated that a commercial seed-treating dust containing 5-percent ethyl mercury phosphate would induce polyploidy in sugar beets. Beet seed soaked for 48 hours in solutions of this dust con-taining from .00001 to .001-percent ethyl mercury phosphate pro-duced from 2 to 42 percent polyploids. A number of comparisons were made of a .001-percent ethyl-mercury-phosphate solution and a 1-percent colchicine solution, soaking the beet seed for 24, 30, and 48 hours. It was noticeable that the polyploids induced by the ethyl-mercury-phosphate treatments were more vigorous than those induced by colchicine and the death loss was considerably less. However, a larger percentage of these plants reverted to normal so that the final percentage of polyploids remaining after 4 months was approximate-ly the same for the 2 chemicals. Ethyl-Mercury-Phosphate Soil Treatment.—A series of experi-
ments was conducted applying a commercial dust containing 5-per-cent ethyl mercury phosphate to the soil. Applications were made of from .005 to .1 gram of ethyl mercury phosphate per row foot direct-ly below the seed, with the seed, directly above the seed, and on top of the soil surface. Polyploids were obtained in all experiments and further experiments showed that polyploids may be produced in abun- 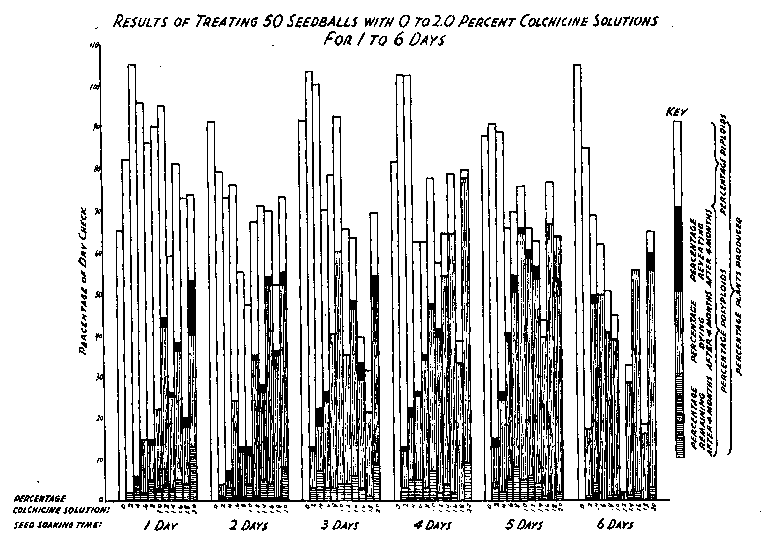